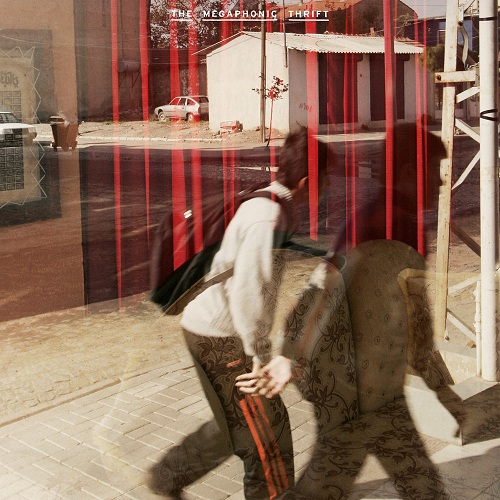 Formed of members from Young Dreams, Low Frequency in Stereo and Casiokids, Norway’s supergroup-of-sorts The Megaphonic Thrift are said to “hate being labelled”. True to form, their follow-up to 2010′s well-received debut Decay Decoy is not only self-titled, but relegates the band name to a tiny line across the top of the cover. The message is clear – it’s what is on the inside that counts.

What’s inside is a set of songs which walks the line between the high-octane energy for which the Thrift’s gigs are famed and the more accessible knack for melody which underpins much of their music. Instead of attempting to replicate their live impact or to break any dramatically new ground, the band have created an album of dependable thrills – sometimes chaotic, at other times hypnotic but always determinedly Megaphonic.

Despite their disparate origins, the Thrift sound more comfortable together than ever. Their tightness helps them navigate the waterfall of riffs and guitar squalls that is opener ‘Tune Your Mind’, the opening salvo of the album’s rockier side which – in true noise pop style – drapes immediate melodies in layer after layer of amplified buzz. Where these songs really impress, though, is when they throw a trick or two into the formula. A case in point is album highlight ‘Fire Walk With Everyone’, its teasing riff a place-holder for a chorus which is delayed time and again to tantalising effect. Richard Myklebust’s deceptively relaxed vocal, backed up with feminine tones from Linn Frøkedal, is absolutely integral to the money shot moments not only here but in ‘Kill, Breathe and Frown’ as well.

Very often the lasting appeal of an album can be judged by its slower songs, and when the Thrift alter modes on numbers like ‘I Wanted You To Know’ they do themselves credit by making up in depth what they sacrifice in power. Exploiting to full effect the subtle ambiguity of the song’s title phrase, Myklebust and Frøkedal put in another star vocal turn while Fredrik Vogsborg and Njål Clementsen round out the unfolding, hypnotic sound. Elsewhere, ‘Over the Mountain, Down in a Teaspoon’ is, despite its unlikely title, a impressively grand two and a half minutes which in another world might have served as a fine closer to the record.

Since their formation the Megaphonic Thrift have attracted more attention with their incendiary performances than with their recorded output. Even though this self-titled return to the studio is hardly likely to be 2012′s high watermark for innovative rock, it is nevertheless a cohesive and engaging effort which expands and varies the band’s sound. Far from a stylistic throwback or fly-by-night side project, the Thrift prove themselves to be the real deal – and whatever the merits of noise pop, there’s a reason to be cheerful.

Listen to The Megaphonic Thrift