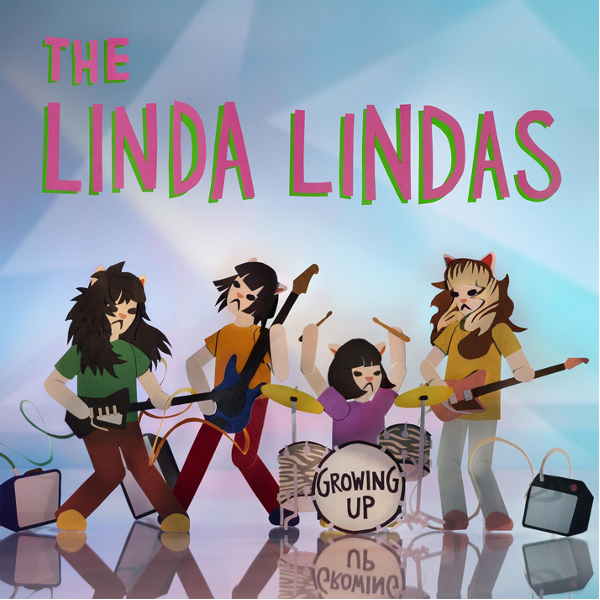 LA-based quartet The Lindas Lindas spent the late 2010s opening for riot grrrl legends Bikini Kill and writing music for Netflix’s Moxie. To say they’d built up a respectable resume for a group of aspiring teens and pre-teens would be an understatement, yet no one could have anticipated what would come next for the four-piece, as they were catapulted into a new stratosphere of fame almost overnight.

A May 2021 performance of their new song “Racist, Sexist, Boy” at the LA Public Library turned the band - formed of sisters Mila and Lucia de la Garza, their cousin Eloise Wong and family friend Bela Salzar - into overnight sensations. Perhaps the facts of the two minute viral video - the library setting, the contrast of the girl’s affable demeanor with the righteous fury of their rip-roaring anthem - distracted from a fundamental truth; “Racist, Sexist Boy” is an undeniably great song.

Inspired by an interaction between Mila and a classmate whose dad told him to stay away from Chinese people, the song channels the same rage that defined the best riot grrrl music of the ‘90s; tackling intergenerational trauma while making its narrator sound triumphant, rather than victimized. Moving between gloriously juvenile insults (“Riffraff / Jerkface / Hater”) to moments of breath-taking insight (“We rebuild what you destroy”), it is unquestionably the centerpiece of the band’s debut LP.

Barely clocking in at 25 minutes, Growing Up offers an economic run through the band’s core talents. At times, it can feel slightly rushed - with the band seeming understandably eager to quickly follow-up on early hype. At moments - namely on the title track - the band settle for the sort of Disney Channel esque tempo and style that would be expected for a band whose members range from the ages of 11 and 17. At it’s best, however, Growing Up is a fantastically multi-dimensional record that presents a shining showcase of four preternaturally talented stars.

“Why” - written by Eloise - captures discontent like lightning in a bottle, disconcertingly towing the line between teenage angst and something more serious (“I look up and see the sun / I didn’t want it anyway / So I just drown out everything / Cause I cannot feel this way”). “Nino”, alternately, is defiant in its refusal to take itself too seriously; written as an ode to Bela’s cat (“Nino the savage cat / Killer of mice and rats”). Opener “Oh!” is an obvious highlight; invoking Dig Me Out era Sleater-Kinney with its furious, compressed arrangements and cries of “Why can I do? / What can I say?”.

“Oh!” perfectly captures the fundamental awkwardness of growing up - of relitigating and cringing over everything you’ve said, and regretting everything you didn’t. “Magic”, similarly captures the contradictory - yet often simultaneously experienced - feelings of at once wanting to be invisible, while decrying that nobody really sees you. Bela, Mila, Eloise and Lucia are adept lyricists. Even when they indulge tried-and-true metaphors and turns-of-phrase, they expand upon them beyond their usual restraints (“I wished upon a star / But wishing only takes you so far / I reached out for a new start / Before it all began to fall apart”). Growing Up, then, while uneven, is a propulsive statement of intent from some of Gen-Z’s most convincing spokespeople.