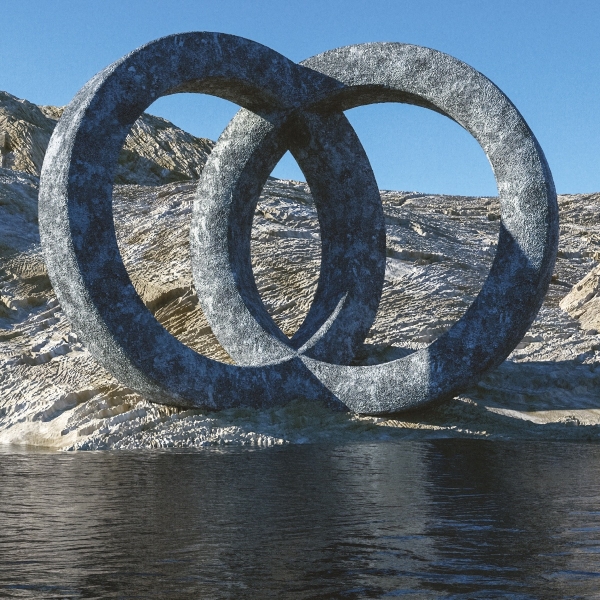 Musical duo and married couple Kat Day and Nicholas Wood have been active as The KVB since 2010, operating in the shadows and quietly creating a back catalogue of electronica, krautrock and shoegaze indebted synth pop.

For this seventh album it’s very much a case of not fixing something if not broke, though there are minor tweaks such as dual vocals for the first time, though we remain firmly in the realm of breathy, sometimes barely there vocals colliding with synthisized electronics with slashes of post-punk guitar. Sketched out in Spain and Berlin, before heading back to the UK as the pandemic took hold, Unity is inspired by a lack of movement, not only from being locked down, but also European architecture, namely the crumbling half-built luxury villas in Spain, unfinished since the financial crash of the previous decade, urban decay meets capitalism failure.

The multi-layered "Sunrise Over Concrete", an instrumental synth-based opener plays out like an introduction piece to film, bleeds into "Unité", a piece influenced by their time living in Berlin, looped synths and repetitive lyrics such as “Linear industrial city / Modular factory living, together with the slowed down EBM influences are nagging and hypnotic.

Though electronics are their main focus, the introduction of guitar takes their sound into the area of indie-pop which on tracks such as "Unbound" and "World On Fire" has the same kind of spaced out indie charm of Jane Weaver or early Stereolab. Known as an audio-visual unit, these two elements translate into sound well, the low pace of Blind, and the excellent epic Ladytron-esque closer "Omni" manage to incorporate images of dystopia as well as hope into the structure of a four-minute pop song with seemingly minimal effort.

The female/male synth fused with rock duo is a saturated market but on Unity The KVB showcase why they’re worthy of attention.