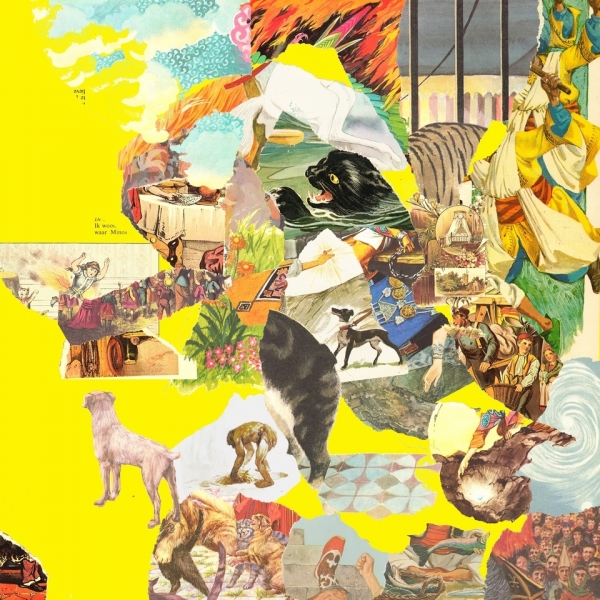 Since releasing their debut record Youth Hunt back in 2017, it’s seemed as if no one has known what exactly to make of The Homesick.

Tying an angular and meandering form of post-punk to whimsical and highly eccentric takes on topics ranging from teenage Christianity to modern food habits, plus the background knowledge that drummer Erik Woudwijk saved up from the age of 12 to buy the Unimog, a decommissioned military vehicle, it’s fair to say a character emerged that both baffled and intrigued listeners. Loaded lines with seemingly obvious connotations (“Patriotism you’re all mine/I’m an eater of meat” from “Eater of Meat”) were set to fluctuating and often comical instrumentals and vocals. Was this new trio from Dokkum, a small town in the north of the Netherlands, trying to impart wisdom and insight, or were they just dragging us along for a laugh?

The band’s new follow-up, The Big Exercise, will do little to assuage those desperate for an answer as to where The Homesick’s convictions lie. Opener “What’s In Store” is a dainty folk tune led by a sharp guitar melody and soft, hazy vocals, a misnomer in that there is no other track here quite like it. Elsewhere, the trio have apparently decided to focus less on the spiritual as on their debut and move their lense instead onto more tangible topics. “Celebrate My Fantasy”, which is an urgent exploration into vocalist Elias Elgersma’s experience with sleep paralysis, and “The Small Exercise”, which tackles the perennial issue of wanting someone to want you back, are evidence of this in action. Still, even if there are concerns and paranoias rooted within these tracks, the intentions are sometimes a little murky.

While none of this is objectively a bad thing, and much of it is rather excellent, what continues to most notably define The Homesick is the band’s liberal and highly inventive style. While often referred to as part of the ‘scene’ in the Netherlands that also includes acts such as Canshaker Pi, The Homesick find closer parallels in the eccentric pop of Animal Collective, Ariel Pink or King Gizzard and the Lizard Wizard. Whether the deadpan hilarity of “Focus On The Beach” to the maze which is “Male Bonding”, there is a license to roam that imbues the album with unique vigour. Maybe it’s part and parcel of growing up and forming a band somewhere like Dokkum, but whether it’s a by-product of isolationism or a determination to take songs to their illogical conclusions, The Big Exercise benefits from The Homesick’s unwillingness to compromise.

Sailing an ever-changing sea of off-beat rhythms, key changes, and occasional baroque flourishes, what The Big Exercise does confirm is that The Homesick are well and truly earnest post-punk voyagers. At times strained, others contemplative, though always whimsical, theirs is a carefully constructed character, one that refuses to take itself too seriously though never dares become anything close to disinterested. And for that, and indeed much else, they should be highly commended.