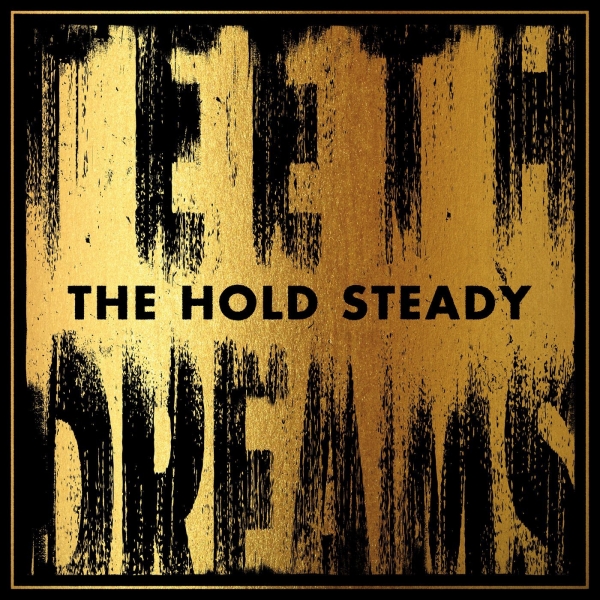 Being dubbed “The New E Street Band” could prove a millstone for some groups, but The Hold Steady don’t seem overly burdened by the tag. They’ve been attracting high-end critical praise despite fairly moderate record sales for ages: In Walk Like A Man, a 2011 study of Bruce Springsteen fandom, author Robert J. Wiersema identifies The Hold Steady as the true 21st century inheritors of The Boss’s flame. Wiersma asserts that their “overarching, fragile sense of hope’ feels ‘strangely redemptive and affirming, all wrapped up in hook-laden pop and bar-honed musical chops”. In a piece discussing the greatest lyricists in contemporary rock, The New Yorker’s Sasha Frere-Jones declared HS frontman and songwriter Craig Finn to be “the real thing” and celebrated the band’s ability to “deliver their songs emphatically, as though the point of making music is to communicate”. Veteran US rock scribe Robert Christgau has acclaimed their union of “narrative structures to a specific rock tradition”.

Perhaps because they’re a bit longer in the tooth than other latter-day Bruce acolytes like, for instance, The Gaslight Anthem, The Hold Steady aren’t burdened by a fawning reverence towards their Local Hero. On their sixth album (and first for new label Washington Square) the NYC-via-Minneapolis fivesome maintain their wordy, haphazard bar band vibe, tempered by a pervading sense of melancholy: “waking up with that American sadness” as Finn drawls on The Replacements-like “On With The Business.”

Opener “I Hope This Whole Thing Didn’t Frighten You” echoes The Clash’s “London Calling” with some ominous imagery (“They’re building a bunker down by the river…..They’ve got masks for the gas”) but the next track, “Spinners”, deals in colossal, reverberating 70s stadium riffs and rousing platitudes. And so it goes for most of Teeth Dreams. Finn’s lyrics can feel a bit tired along the way, with the central character in “Runner’s High” claiming “the thing in California is kind of compromised” – a pretty hackneyed sentiment already echoed by generations of songwriters from Randy Newman to Ben Gibbard. The trouble with a middle-aged act trying to recapture a little of the Glory Days also rears its head on “The Only Thing” as Finn laments that ‘this town was so much fun when there weren’t so much police.” To misquote Alan Partridge, it’s not really an appropriate sentiment for a man in his mid-forties.

The more reflective moments on the album are some of the best, with Finn occasionaly veering towards a vocal intonation akin to that of his hero, Hüsker Dü’s Bob Mould. Slowie “Almost Everything” and closer “Oaks” perhaps do this best, with the U2-ish “The Ambassador”, which pays homage to Minnesotan blue-collar life and joyous release found after hours – “The nights were hot and hissing like an iron/ The days spent climbing walls like a vine” - another strong effort.