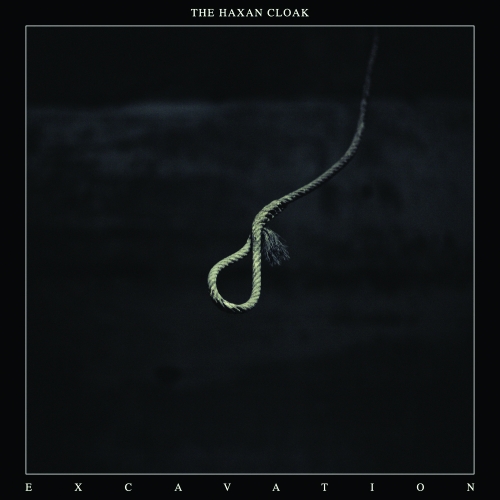 Bobby Krlic – a.k.a. The Haxan Cloak – has talked of how Excavation is, if not a concept record, certainly one with a unifying theme. It’s supposedly the sonic manifestation of a tale in which a man explores his own post-death existence, and though there’s no story to follow as such (mumbles, digitally altered howls and samples of what sound like distant screams abound, but there are no lyrics), you don’t get the impression he’s pulling your leg.

For it to even attempt such a cheeky bit of deceit would be totally out of keeping with the imposing seriousness of the project, which grows unabated throughout its near hour long stay. This is lightless, horrifically bleak electronic music, but it still sounds human despite its lack of words, melodies or analog instrumentation; there’s a tangible personality to it that’s all its own. Krlic counts himself a fan of doom metallers Sunn O))), and it shows – despite them operating with wholly different tools, you’d believe someone if they told you The Haxan Cloak’s work was actually interpretations of their guitar-laden epics. It also shares parallels with the ambient noise of Tim Hecker or something you might find in the darker recesses of Wolf Eyes’ hard drives, but what Krlic has on any of them is a signature way with almost funereal percussion – the heavily reverb-laden clicks and pops of ‘Excavation I’ arrive so slowly that you imagine its BPM count is in the minus numbers.

It feels very at home on Tri Angle, a label once associated with whatever “witch house” was, but – to the credit of its maker and those who are putting it out – sounds like such a left turn from the music of Salem et al that the term sounds far too light and fluffy to appropriately apply to it. Trying to think of what exactly is best to call it is likely to hamper one’s experience of Excavations however. Instead, the best approach seems to be an almost meditative one, whereby switching off part of one’s brain (the part that longs for a drop, or a beat, or a melody) is required to truly enjoy proceedings.

That is, if you really can truly enjoy anything this relentlessly bleak. It’s more that one submits to it, leaving baffled and wholly impressed, if far from conventionally entertained, by its mastery of sheer desolation. It gets you thinking a lot about the man who made it, and whether he’s okay. Numbers like the tortured yelps of ‘Miste’ are just so sad that you hope composing it provides Krlic some sort of solace or catharsis. If he’s merely wallowing in this stuff, I’m going to start tweeting his friends asking if one of them could go round with a few beers to check on the lad.

By the time the semi-industrial drones of ‘The Drop’ reach their closing, thirteenth minute, you’ll feel as drained as the music sounds. Whilst explorations of life on the other side of death aren’t likely to form the record in your collection you’ll visit most often, it’s a totally fascinating look at one man’s idea of just what that otherworldly state might be (or at least, might sound like). Amazed though I would be however, if there was an afterlife – and it sounded like this – I’ll be happy to settle for there being nothing beyond death.