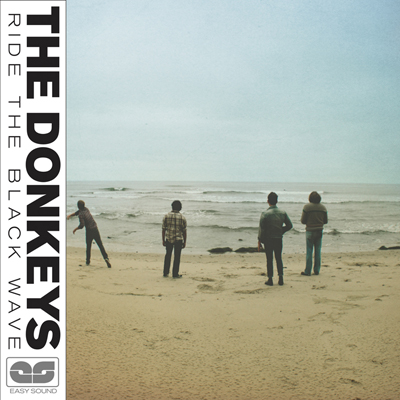 ​As well as having one of the best names in modern music, The Donkeys have one of the chillest, coolest sounds you’re likely to find outside of a Jicks record. In facr, you could probably trace their lineage back through the Jicks’ leader Stephen Malkmus and Wilco’s Jeff Tweedy all the way, via Tom Petty and Steve Earle, to The Grateful Dead, The Flying Burrito Brothers and The Byrds (with Parsons and without).

As you can probably guess from those million-pound namedrops, their sound is pretty astounding to fans of sun, relaxation and chiming guitars. The laidback, harmonious indie-rock crafted by a Californian quartet (heard that one before?) with more than a twinkle in their collective (hypnotic) eye: Opener “Sunny Daze” is so relaxed it sounds comatose – glistening guitar lines bounce off each other in a lackadaisical manner, the vocals are barely above a hushed whisper… only the guitar solo and tight-as-hell rhythm keep the track from drifting off into a dream. Also of note is the incredible replication of Ray Manzarek’s (RIP) keyboard tone from Strange Days - compare the sound of the keys on “Sunny Daze” and “You’re Lost Little Girl” to catch my drift.

From there, the record never leaves first gear – and is all the better for it. The best songs on Ride The Black Wave revel in their red-eyed chill-ness: The Hawaii-via-Bikini Bottom gramophone crackle of “Brown Eyed Lady” immediately reminds you of the latest Mac DeMarco record, for instance. Also, the Beatles-y raga-rock of “Imperial Beach” is an absolute treasure – even without vocals! Aside from “Brown Eyed Lady”, there are a few cuts on here that get close to the work of The Donkeys’ contemporaries – check out the Tame Impala is-ness of “Nothing” and the Night Beats-y Doors-worship of “The Manx”… they’re both tremendous takes on sounds you’re likely to be hearing elsewhere, and your enjoyment of them in the context of Ride The Black Wave depends on your enjoyment of them elsewhere, to be honest.

The lighter-than-air delicacy of penultimate track Bahamas is evidence, if any should be needed, that there are some unique ideas on here. The track is so buoyant it’s a definite candidate for album-pick. The title track is another superb, original number with the most downbeat vibe on the record – for that reason alone, it’s noteworthy. I Heart Alabama is a personal favourite – vocalist Sam Sprague is a hop, skip and jump away from becoming Gene Clark, what with his solemn delivery and seductive timbre.

Ride The Black Wave is both a joy to listen to and a pain to consider critically: The type of music they’re playing could realistically be called superfluous or superb, depending on your level of engagement with it; the tunes could be called plagiaristic or panoptic depending on your state of mind when you’re listening to them. If you’re the kind of listener that will gladly listen to Gram Parsons on a weekday and save the Burrito Brothers for the weekend, it’s almost as though this record was made to greet you when you get home from a particularly aggravating Monday at work. Ride The Black Wave stands every chance of becoming a panacea for your daily woes and strife, if only you can stay awake long enough to hear it all. ​