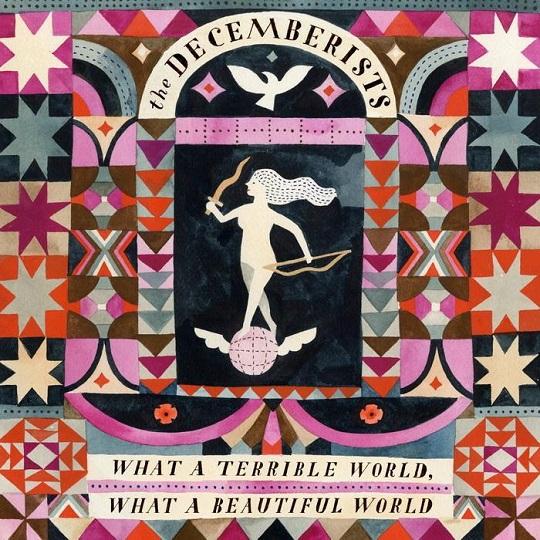 I just read a news story on a 7-year old girl who survived a small plane crash, trekking nearly a mile in the cold, wintry Kentucky wilderness in Florida-weather clothing to get help. Everyone else died, including her parents, sister, and cousin. The literal miracle that this girl survived the crash and her search for help and the burden of facing this world utterly alone now as her survivor’s reward both will bring a tear to your eye. Colin Meloy is dead on – “what a terrible world, what a beautiful world.”

It’s been a while since we’ve heard from Meloy and company all together, not since 2010’s back to basics The King Is Dead.  His bandmates have moonlighted as part of the very fine Americana troupe, Black Prairie, while Meloy himself has most notably produced a trilogy of young adult fantasy novels.  Meloy is a writer’s writer, easily evidenced by The Decemberists’ hyper-literary nature, so it’s no surprise he’d kept writing during the band’s hiatus, as he alluded to in a recent Rolling Stone interview.  According to Meloy, the difference this time around was his culling of songs written over the intervening years and an open-ended recording schedule, devoid of an overall musical or lyrical theme.

Theme has always been a cornerstone for The Decemberists, notoriously never more so than Meloy’s “rock opera” of 2008’s Hazards Of Love, but even lacking that level of concept, the early albums hung together by Meloy’s pervasive narrative skills and burgeoning vocabulary and the lyrical and musical stylistic nod to antiquity.  The King Is Dead unsurprisingly served as a reset for Meloy, backing off narrative and, for the first time, favouring a predominantly personal scope for his songs, while the band relied on straight, tight, unadorned folk-rock.   Perhaps the nature of the beast in how it was birthed, What A Terrible World, What A Beautiful World (henceforth, mercifully referred to it as “the album” or Terrible/Beautiful) features some of all of this as well as dashes of new sounds for the band.

Ironically, given the dichotomy of its title, the scattershot nature of the album is both a blessing and a curse.  Terrible/Beautiful contains some of Meloy’s most accessible songs to date, chiefly lead single “Make You Better”, straight-laced ‘90s-inspired alt-balladry, dressed up with a hooky chorus, and polished with the undeniable backing vocals of Portland, Oregon indie stalwart Rachel Flotard and Neko Case’s harmonic partner in crime, Kelly Hogan.  Meloy has rarely acquitted himself so vulnerably, and he does so with aplomb.  Elsewhere, we get the breezy, string-led “Cavalry Captain”, the skulking, Spanish-flavoured “Easy Come, Easy Go”, and the bluesy-chorused “Till The Water Is Long Gone” as further illustrations of the band diversifying their sound.  These are joined by early album throwbacks (“Philomena”, “Anti-Summersong”) and extensions of The King Is Dead’s roots-rock (“The Wrong Year” and “Mistral”).

Perhaps most disarming is Meloy’s opener, “The Singer Addressing His Audience”, a jarring direct dispatch to his listeners, with Meloy unapologetically remarking, “You threw your arms around us / in the hopes we wouldn’t change/but we had to change some.”  Couched near the end is “12-17-12,” a paean to the Newtown elementary school massacre and testament to the bewilderment the parent of young children felt in its wake.  Accompanied by only acoustic guitar, harmonica, and wisps of hi-hat, it’s Meloy at his starkest and his most direct social commentary, its words providing the album its powerful namesake.

Maybe, as Meloy puts it, The Decemberists did have to change; it was likely inevitable with its members busying themselves with outside projects during their longest pause yet.  As a fan, I can attest to Meloy’s presumed fan sentiment in his album opener, I didn’t need them to.  The Decemberists deservedly earn their status as an American musical institution in constructing their idiosyncrasies into near-flawless full albums time and again.  As I suggested earlier, theme – be it musical, lyrical, or both – has provided the sturdy frame and foundation for the band to pull off this feat.  Terrible/Beautiful wants for that, particularly given the emotionally ambitious potential the sentiment of its title would lend to a focused theme.

That said, Terrible/Beautiful has some wonderful songs and does emit glints of growth, even if it is a tad long and flabbier than previous outings.  We should all still be happy to have it, with our appetites whetted in hopes it won’t be as long for something better next time out.