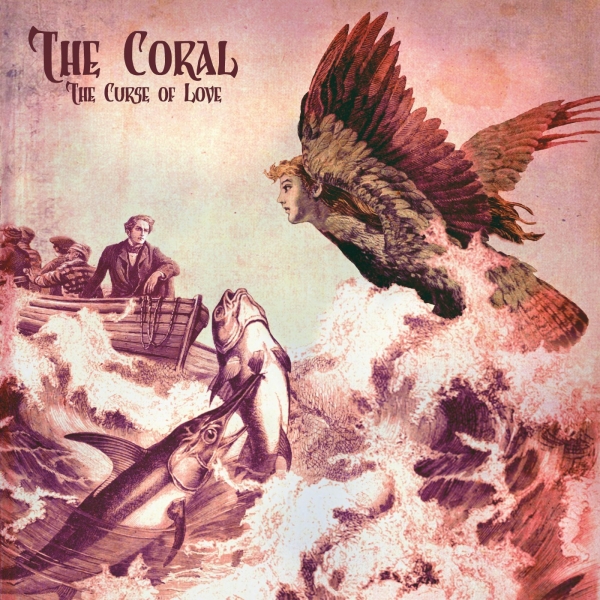 Recorded at some point between 2005’s The Invisible Invasion and 2007’s Root & Echoes, The Coral’s ‘lost’ LP The Curse of Love is an oddly bipolar record that can’t seem to decide whether love is indeed a curse or a blessing. Consisting of ten tracks sandwiched between two versions of similar songs, The Coral’s latest release is a far cry from the neo-psychedelia of their self-titled debut – but it also shuns the pop hooks that kept the band firmly in the public consciousness for much of the 2000’s. Initially an intriguing listen, it eventually materialises that The Curse of Love was justifiably scrapped by the band in favour of an all-together more accessible record in ‘Roots & Echoes’.

Some pretty minimalist instrumentation keeps The Curse of Love firmly in the realm of middle-of-the-road folk, although the album suffers from some really odd production choices. The weird, wobbly synth that runs through "Wrapped In Blue" and "You Closed the Door" sticks out like a sore thumb in an otherwise consistent sounding LP, whilst the two instrumental tracks "The Second Self" and "Nine Times The Colour Red" mis-fire horribly.

There are a few moody, atmospheric highlights – "View From The Mirror" and "Willow Song" both achieve an eerie kind of beauty – but for the most part The Curse of Love doesn’t offer any of the pop hooks that made early Coral albums so enjoyable.  "The Watcher In The Distance" makes an attempt at anthemia that falls flat on its face, and otherwise James Skelly’s vocal talent feels wasted on a record that miserably plods along.

The album’s real saving graces are its opening and closing title tracks, which share the same chorus but evoke different feelings. "Curse Of Love (Part One)" starts things off on a bit of a downer, with Skelly moping about “shadows against the wall”, whilst part two ends the record on a New Flamenco-inspired high. It’s an intriguing choice that mirrors the tone of the album, which starts depressingly and perks up towards the end.

The Coral have been on hiatus since 2010’s Butterfly House and upon their inevitable reunion you can’t imagine there’ll be much demand to hear this batch of songs. The band’s strength has always lied in melodic psychedelia and ska, and whilst this isn’t their first attempt at folk, it’s by far their weakest. Considering their reputation as one of the Noughties' most inventive indie bands, it probably would have been for the best if The Curse Of Love had stayed lost.