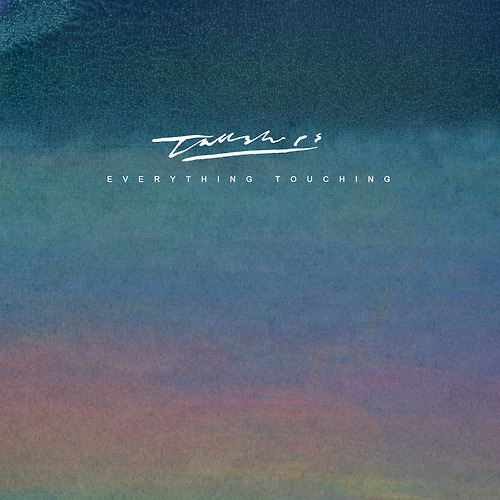 The rise of Falmouth-originating trio Tall Ships has been conducted largely under the radar by means of years of touring and EPs, but it’s undoubtedly happening – as anyone who saw them packing out small tents with loop pedal-aided waves of incisive attack in front of rows of acolytes who know pretty much every word at a festival over the summer will aver. Their high tariff combination of math riffs and soaring anthemry isn’t entirely unusual – Two Door Cinema Club have made commercial hay by putting the firm emphasis on the latter – but on previous releases it’s made them feel a little disjointed, ambition sometimes falling victim to ideas that don’t match or meet their potential.

For the first half of Everything Touching at least, the pure rush is king. ‘T=0′ sets off like a well tooled machine, looped percussion and crunching riff creating a propulsive throwdown into which thumping bass and skyscraping synth subtly snake around and shift the balance, vocals not entering until halfway through. Coupled with the emotively tender lyrics – “When I’m with you we are invincible, together as one, our worries come undone” – it sounds like a big anthem, just not in a way daytime Radio 1 would understand. Similarly ‘Phosphorescence’ is punctuated by everyone-together choral moments and a big chorus designed for fists aloft in big halls while underpinned by the sort of awkward repetitive riff Mike Kinsella would recognise. ‘Oscar’ shotgun-marries a strutting, dislocated guitar line to a bruised vocal that steadily aids in breaking everything else down, through an insistent tribal drumming interlude, into something cavernous, coming out the other side as something ambitious and widescreen while still not seeming quite right for anything as straightforwardly blasé as mass acceptance before a huge cymbal-crashing coda. Later on the recent single ‘Gallop’ is as approachable as it gets, toms racing at the pace suggested by the title augmented by equally determined pushing against the rhythm and lyrical pondering about the mental speed of the ageing process. It’s only later you realise there’s barely a proper chorus in the whole record.

If some of this makes Tall Ships sound a little one-note-guitar-complexity-plus-big-crowd-singalong-potential in tone (and there are moments when the dreaded spectre of Mumford & Sons’ dynamics invading Foals’ rehearsal room raises its head), there are also more than enough little touches and inventive ideas about build and release to get by any idea that their sound has been flattened out for wider gain as opposed to developing and maturing into new forms. ‘Ode To Ancestors’ has the soaring conclusion and the tricksy riff but they take more than two minutes to arrive in favour of a quiet ambient drift over which a heartaching Ric Phethean frames love in terms of science (“within you every particle is perfect and your beating heart the sum of many working parts”) and “a triumph of natural selection, every mutation leading to your perfection”. Their accumulated road experience has sharpened matters noticeably since those earlier releases, the trio musically so adept they could easily have gone in all sorts of directions here, whether that be the Three Trapped Tigers-recalling instrumental explorations at speed of ‘Best Ever’ reeling from clockwork interplay to full-on noise bursts, breaking down into near silence before crashing in right over the top and aiming heavenwards, or the simmering electronic post-rock panorama ‘Send News’, nothing more than filler less than a minute long but one which expertly links two tracks together without any jarring. Throughout, new layers are unearthed with each listen, the detail aided by sympathetically on-point production that polishes things up without removing their idiosyncracies.

Nowhere is this adaptability in complete confidence of their own abilities and sychronisation more apparent than on the nine minutes plus of closer ‘Murmurations’. Essentially one huge build to a brief climactic high, it doesn’t so much as seek a beat for more than two minutes but subtly evolves in its own time into a fractured shuffle before the Sigur Ros-esque delicate guitar line is overtaken by frenzied drumming being pushed along by pulses of underpinning, circulating synths that eventually take over and hint at Yeasayer’s tribal electro before a huge uplifting group vocal breaks in, complementing rather than bursting the sonic build, before the component parts drift off into space. It’s as close as they come to post-rock tropes while not really sounding like that at all – or indeed anyone but themselves. Their promise has been largely fulfilled by this collection that takes dynamic shifts and ideas long pored over, stretching and turning them inside out and making them seem entirely fresh, compelling and charged again.

Listen to Everything Touching