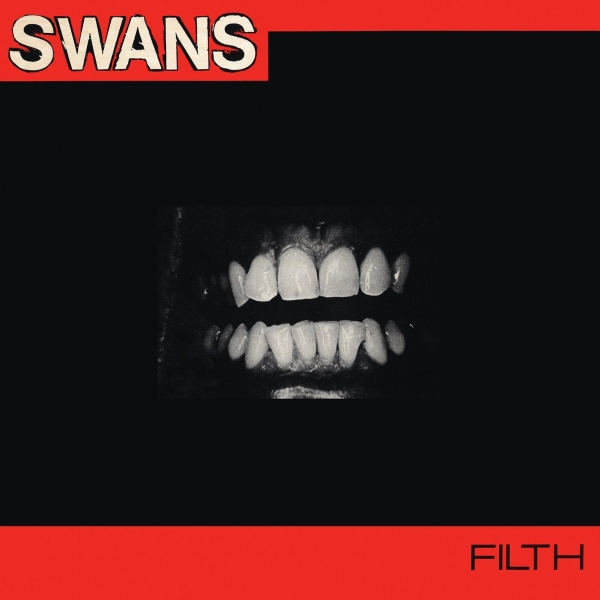 In what’s an act of classic obtuseness from Swans bandleader Michael Gira, the reissue of Filth comes at that famous milestone of thirty one years down the line from the original release date in 1983.

Surrounded at that time by No Wavers – and it is only now that Gira has confessed that scene did in fact have some influence on him, even if it was just for something to react against – like DNA, Mars, James Chance and Teenage Jesus and the Jerks, Filth stood out simply because of just how abrasive and unlike anything else around it sounded. There’s little doubt that the blues left its imprint on much of New York’s music scene from the very moment it appeared as a genre, and while No Wave and punk reinterpreted it in their own unique ways, Gira and Swans absorbed it completely. Gira has never been short of praising Chester Burnett, aka Howlin’ Wolf, and admitting his love for the blues and gospel but two chords and basic repetition has never sounded as thrilling as when Swans play it – and it all began here on Filth.

The step-up from 1982's self-titled EP comes in part from two places: Gira retained Jonathan Kane as a drummer and added a second percussionist in the form of Roli Mosimann, and Filth also sees the first appearance from long-term collaborator and genius guitarist Norman Westberg. These changes are evident from the moment “Stay Here” lurches into view, all metallic bass and drums and sustained feedback attacks from the guitar of Westberg. Gira is at his most aggressively macho – something that was missing from NYC’s scene at that time – as he roars “Be strong! Be hard! Resist temptation!” already seemingly overcome with passion and rage. Repetition is key; the song goes nowhere but it’s utterly enthralling, the physical music which now defines Swans taking shape by the end of one single song.

The low-end bass and offbeat clang of “Big Strong Boss” is the clear blueprint for the high intensity rock music of something like “Oxygen” from To Be Kind; a kind of leeringly sexual music that is unforgiving in its crude approach, it’s joined by the fearsomely minimal “Blackout” which is little more than drums and stabs of feedback, with Gira expressing visceral and feral thoughts unlike any other singer of his generation. Swans may have left the brevity of tracks like “Freak” behind but this track is as emotionally draining as any of the band’s thirty minute excursions simply because of the violent imagery Gira conjures: "Come here you freak/I saw you crawling last night/Big erection in your hand/You rule the world/You're gonna murder somebody weak.”

It’s so difficult to pick a highlight or a track that points to Swans ending up as we now know them, but the pummelling, cyclical “Thank You” and the slow assault of “Gang” give us hints of what Gira wanted to carry on and expand, and both have the improvisational feel that now dominates the music he continues to create. But, what has changed in the thirty-one years since Filth is the move away from overt masculinity; of course Gira did collaborate for a long time with Jarboe but The Seer and To Be Kind finally reflected his love of the female voice and persona. With the likes of Karen O, Cold Specks and St Vincent all making appearances across those records it doesn’t quite represent a softening of the Swans sound but the 21st century version of Gira’s band does, all these years down the line, complete his vision for the project. No more “flex your muscles”...replaced with “to be lost, in a bed, touching you”. You’d never call Gira a romantic, and that’s never clearer than on Filth. Now, it’s perhaps a slightly different story.

Filth is a brilliant work of art; we wouldn’t have the Swans we know today without Gira immediately committing to his love of the blues and minimalist brutality on that debut record. Despite the time that’s passed, the album still sounds like it could have been made in 2014 – elemental, uncompromising and utterly vital.