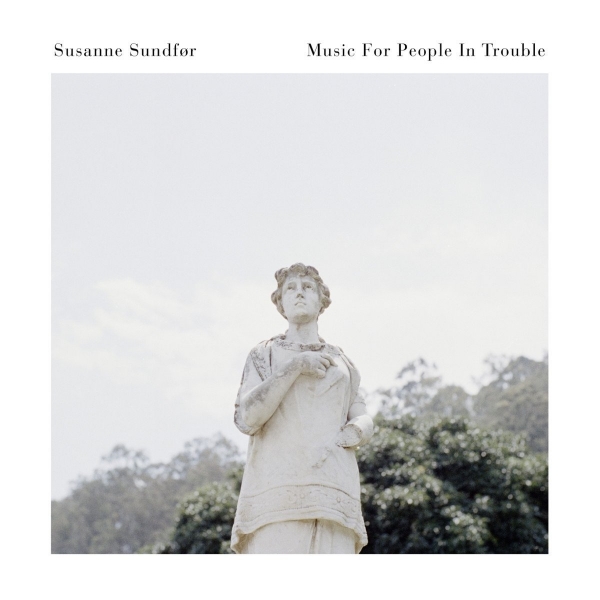 Norwegian singer/songwriter and producer Susanne Sundfør’s 2015 international breakthrough album Ten Love Songs set out its ambitions with its title, and it followed through.

A concise dissection of the love song form, it was sonically challenging with a great understanding of melodic pop at its core. Its follow-up Music for People in Trouble also has a clear conceptual framework, and a similar commitment to unravelling its potential.

Musically and lyrically, Music for People in Trouble retains the dark heart of the previous album, but the mood is more introspective, at least on the surface. The arrangements are consistently sparse, with Sundfør’s clear, close-up voice joined by one or two instruments at a time: there’s a sense that Sundfør is alone; an often uncomfortable intimacy. Deceptively simple accompaniments of slide guitar, piano and acoustic guitar are framed with short field recordings of streams, birdsong, church bells; contextualising the struggles of the songs within a world that continues as normal despite relentless internal and external conflict.

When the songs pan out to feature other players, it’s brief and confounding - the resigned end-of-romance dirge “Good Luck Bad Luck” ends with an unexpected slowed-down jazz break that disappears just as the listener gets comfortable. On album closer “Mountaineers”, Sundfør is joined by fellow mournful Northern European resident John Grant, who chants a tale of romantic breakdown and plane crashes (“jumbo jets spiralling down/like vultures of the stars”) over an ominous drone reminiscent of late-period Scott Walker. Oil spills from wrecked aircraft are alluded to at least twice on the album in the context of relationship trouble: interpersonal and worldly disasters are dealt with so closely that they become homogenous, both equally apocalyptic.

Music for People in Trouble perhaps doesn’t have the crossover appeal that Ten Love Songs had, and its head-on engagement with contemporary struggles will certainly not be for everyone. But for those who are done with escapism, at least for an hour or so, its sustained mood brings rich rewards.