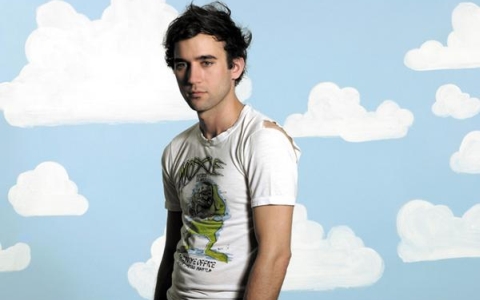 And about bloody time! Since the crypt-like silence following 2004′s achingly beautiful atlas of a record, Illinois,  indie fans everywhere began to fear that the once-effevescent indie darling Sufjan had lost his touch. Sure, The BQE was pleasant, yes – but it’s brash electronic flourishes and seasick strings felt claustrophobic compared to Illinois’ wafting horns and tumbling, sweet guitar plucks.  And an aimless re-make of his 2001 noodlings Run Rabbit Run only served to supplement the public image of Sufjan as a man lost, a banjo-wielding wunderkind bowed under by his own unmistakeable genius.

All Delighted People came, quite literally, out of nowhere – no gushing press releases were sent out, no advance review copies were forwarded, no adverts were tacked up, dog-eared, on the tube, no breathless countdowns were posted by Pitchfork – the EP was simply posted in it’s entirity on music-sharing site Bandcamp (How very web 2.0 of him!) – no leaks, no spills, no frills, no fuss. And the music press went wild. Words, ridiculous words like ‘apocalyptic’ and ‘existentialism’ were bandided about like vowels on Countdown, fans pored over the EP cover, attempting to identify the faces, hoping they would give some faint, lusted-after insight into Sufjan’s guarded personal life- is that Joanna Newsom? Probably not. Is that Leonardo Di Caprio? Well, maybe..

But what’s important here is that the EP is beautiful. And not just beautiful in the sense that the music press use it – in the age of media, ‘beautiful’ applies to any heart-broken troubadour spilling his guts out over his Topshop plaid shirt and artfully battered Fender, or any anaemic indie-act that’ve roped in a string quartet for their latest effort, in a brazen attempt at currying journos into branding them ‘ethereal’ rather than just eye-gougingly boring – but not Sufjan.

The EP’s title track is something very special indeed – a no-shit, genuine, bona-fide, epic – there are spiralling, whining strings, pattering drums, guitar solos bound on elastic, swooping and soaring like swallows, great hanks of choral snippets that buoy Sufjan’s voice along like the tide surging beneath the froth of a sea – it’s a decadent, medieval banquet of a track, shimmering along like Joanna Newsom’s ‘Only Skin’ gone prog – and Sufjan’s voice must’ve improved through under-use, having since aquired a delicate crack- as though permanently caught in that emotional over-lap when one is over-come by laughter and over-come by tears.

Another version of the title track – misleadingly titled ‘All Delighted People (Classic Rock version)’ – since when did Guns & Roses while away their stage time gently strumming a banjo?- satisfy Sufjan’s nascent prog leanings for at least a few tracks – ‘Heirloom’ is Iron & Wine redolent Americana, revelling in it’s own, infused wistfullness, Sufjan cooing ‘Oh I never meant to be a pest to anyone, this time, I only meant to be a friend to everyone, this time’ only to resolve that ‘When you legs give out just lie down, and I will kiss you til your breath is found’, like a true romantic.

‘Arnika’, however, presents a certain world-weariness – admist clopping drums and sweetly interplaying guitar plucks, Sufjan croons “I’m tired of life, I’m tired of waiting for someone”, bemoaning his lost chance of “a night to have slept in the warmth of your bed?” – but even in this cavern of misery Sufjan is accepting, sighing “accidents, they are my friends” at the track’s end in a glass-cracking falsetto.

‘Enchanting Ghost’ is Seven Swans period Sufjan at his finest, gently melodious acoustic guitar mingling with his enchanting mewl – only sporadic pepperings of electric guitar, like rain-water trickling from guttering, break the illusion. There seems to be a theme emerging – the fear of being a nuisance, an annoyance, and ultimately reaching redemption through love – ‘Did you cut your hands on me? Are my edges sharp? Am I a pest to feed?’ Sufjan implores, before heart-breakingly cooing ‘If it grieves you to stay here, just go go go – for I have no spell on you, it’s all a ghost.’

‘From The Mouth of Gabriel’ is an effortless slice of Magnetic Fields-esque whimsy, Sufjan’s elegiac croon tumbling along with, what sounds like, reams and reams of cowbells, mashed with squiggly, nintendo synths – it’s lush, it’s quaint, it’s like Christmas! But even through Sufjan’s musical playfulness, sorrow is still at the root of this record – at one point Sufjan chillingly coos “And what a mess I’ve made of you – you probably should but I won’t let you run away” like the deranged archetype of a clingy lover.

But let’s not forget that this guy is only 35 – he can’t be introspective for all of his life. And hence, we have ‘Djohariah’ – an ode to Sufjan’s little sister, and by far the most optimistic ray of sunshine on this record, although this is hardly saying much. Against the canvas of sultry, twanging guitars, Sufjan spouts such mantras as “You don’t need that man in your life” and “for the world is yours, the world is yours – all the wilderness of the world is yours”. He sings them with such conviction it leaves you wondering whether Sufjan wasn’t a motivational speaker in some past life.

All this leaves the record on a high note – or would leave the record on a high note. This being a Sufjan Stevens record, you’re not going to escape without a final emotional battering. And the final ‘classic rock’ re-work of ‘All Delighted People’ does nicely, Sufjan wailing such greeting-card appropriate sentiments as ‘Hello darkness my old friend, I’ve come to strangle you again’ and ‘I had such much to give, in spite of all the terror and abuse’.

But heck, that’s Sufjan Stevens. He’s still the emotional, down-cast wreck that penned ditties about serial killers, cancer patients and ruined Christmases that he always was. And by God, we love him all the more for it.