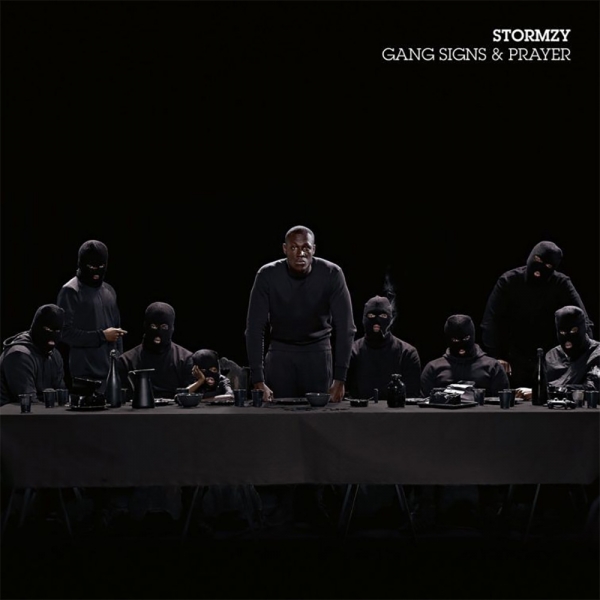 There’s a thick line of eccentric, poetic brilliance in 23-year old Michael Omari that raises his debut record as Stormzy into something truly extraordinary.

Gang Signs & Prayer deals in extremes, like its title would suggest - from the soaring end of days heft of “Mr Skeng” or the Ghetts and J Hus featuring "Bad Boys” to more introspective and sometimes uncomfortably reflective moments such as album closer “Lay Me Bare”. Like his live shows, it’s a record flush with rowdiness and regimentation, packed to the brim with purpose.

Throughout the album, Omari’s talisman is his self-determination. After more than a decade rapping, the young MC’s earned the right to crow loudly and an opening statement of intent sets the record’s tone: “First things first” he asserts, “I’ve been putting in the work, I’m a rebel with a cause”. As an independent artist he’s created a something that feels deliberately empowering and doesn’t revel in novelty. But then Omari’s not just one of the best lyricists in the UK right now, he’s also someone who packs his bars tightly with logic, values and humour. That very British modesty and calling out shit that Grime does so well: “Never had a MAC-10 or a trey pound / You were never bad then, you ain't bad now,” he purrs on “Big For Your Boots” before gushing, “I was in the O2 singing my lungs out / Rudeboy, you're never too big for Adele” (surely a contender for lyric of the year).

Omari roots the album in a working-class London upbringing and it’s uncompromising in its desire to stay to true to the Stormzy blueprint. There’s little slack given to radio play; arguably the record’s most commercial cuts are already out there (bar the affecting Raleigh Ritchie featuring “Don’t Cry For Me”). Nothing is dumbed down, little feels affected. There’s even a phone skit with convicted murderer Crazy Titch (presumably recorded from prison).

And yet there’s room to breathe too. Co-vocals from MNEK and Kehlani (on “Blinded By Your Grace Part 1” and ”Cigarettes & Cush” respectively) are well placed calmer moments that give Gang Signs & Prayer some of the structure it sometimes struggles to maintain. That’s a minor gripe on a record that feels like one of 2017’s most exciting, fascinating and emotionally involving albums.