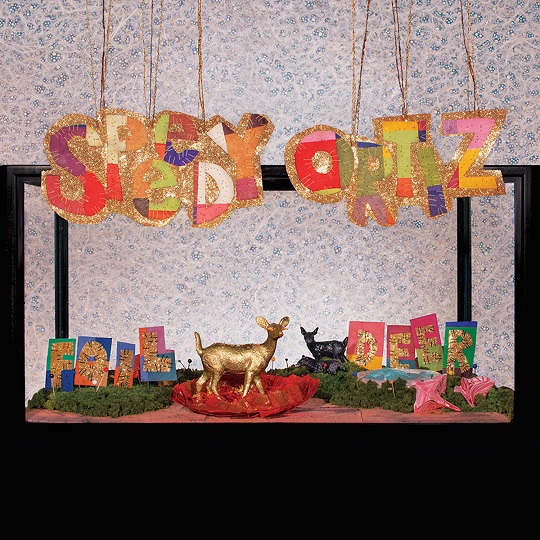 I’m gonna spout some #realtalk here – it’s damn difficult to faithfully write about one of your favorite bands, and it doesn’t help I’ve been in a rut as of late. Professional Writer Sadie Dupuis could probably relate; though, she’s also a primary catalyst for my lexical paralysis. I fucking love Speedy Ortiz; I fucking love Sadie Dupuis. Beyond fronting that fave band of mine, she even writes about music better than I could ever hope to, so what hope do I possibly have to satisfactorily address Dupuis and company’s second full-length outing, Foil Deer? The band announced the album with a nifty sci-fi comic, and I was gonna cue off that for some sort of narrative album review. But then, I don’t know squat about comics and Sadie does, so there went that idea….

I can’t stress enough, I fucking love Speedy Ortiz; you might be thinking, hey this clown’s sorely lacking in objectivity –  and you’d be right. But, sorry to say, there really is no such thing as objectivity in this task. I love Major Arcana, I love the EPs and the early stand alone singles; I emailed my editor the moment I saw Foil Deer’s announcement pop up online and requested to review it. So, you presumably ask, it’s good? Well, of course it’s fucking good, and there’s a healthy dose of my bias in that statement, but it’s also rooted in fact. What’s also fact is that Speedy Ortiz has leapt to the upper echelon of rock bands today. For the sheer, shrewd combination of Dupuis’ delicious wordplay, the nimble guitar melodies, and their dexterous control over dynamics, not many other can stack up.

That’s what we’ve gotten thus far from the band, and it’s like plunging Oreos into a glass of milk – incessantly addictive.  Hell, I couldn’t bring myself to hit the eject button on my car stereo for weeks with Major Arcana; there were morning commutes where I’d honest to God hit the previous track button for “Plough” the entire ride. The swoon was immediate, and it is an immediate album, which is the first departure on Foil Deer. This album makes you work, forces you to hit repeat not to relive sweet, instantly gratifying thrills, but to let it root into your brain to understand it better. While Dupuis has indicated that Major Arcana was the dark album, Foil Deer doesn’t seem brighter at first blush. Aside from the under two minute power pop whirl of “Swell Content”, the album is a skulking beast, chock full of beefy, shifting textures.

This newfound reliance on texture plunges us deeper into the songs’ vortexes, beyond the sprightly, arpeggio-laden melodic runs that grabbed and tickled from previous outings.  Consider the fat guitar string stutters beneath Dupuis on “Dot X”s bridge and the swirling, bulbous grind of “Puffer”, or the muted, fuzzy synths colouring “The Graduates” and new axeman Devin McKnight’s caterwauling squeals all over the damn place. These are outside their box steps by a band that could easily have been destined as simply nothing more than eminently enjoyable. Pair that with Dupuis stepping out from behind her snubs and insecurities – and, as a result, the wry naivete that so often penetrated her vocals – to slough off all the personal and societal bullshit, and Speedy Ortiz is basically saying, cheers for finding us enjoyable, but fuck you if you don’t take us seriously.

Beyond the already oft-quoted “I’m not bossy, I’m the boss” refrain from lead single, “Raising The Skate”, which is Dupuis’ most unabashed assertion of power, across Foil Deer she threatens – “watch your back / ‘cause baby, I’m good with a blade” from opener “Good Neck” – and calls seedy dudes out – “I never flex for your benefit / though I always thought I’d be a benefit to you” from “Mister Difficult”. Vocally, she goads and seduces on “Puffer”, she rages, something she had really only truly mustered before on Major Arcana’s “Gary”, on “Homonovus”, she drips vulnerability in her coos on “Mister Difficult”.  What we’re seeing here on Foil Deer is Dupuis, in effect, growing up (<sniff> don’t it make you misty-eyed?) and pulling her band in tow, becoming comfortable in her own skin to not only show emotion, but to run the entire gamut of them.

The album cover features Dupuis’ gold-foiled deer statuette proudly standing at attention in a glass aquarium. It’s all gussied up and oh so much prettier than its drab, colourless counterpart. It’s not in a cage per se, we can see it and it us; maybe we’d try to reach and grab it, but stub our fingers on the glass. Perhaps the deer would saunter over to try to meet us only to find the same. So, we can gaze at and admire it is all, and it can stand looking majestically beautiful – and that’s all. I think maybe Dupuis feels just this way, but Foil Deer is the thunder to shatter that glass.

Oh, and in case I hadn’t told you, I FUCKING LOVE SPEEDY ORTIZ.