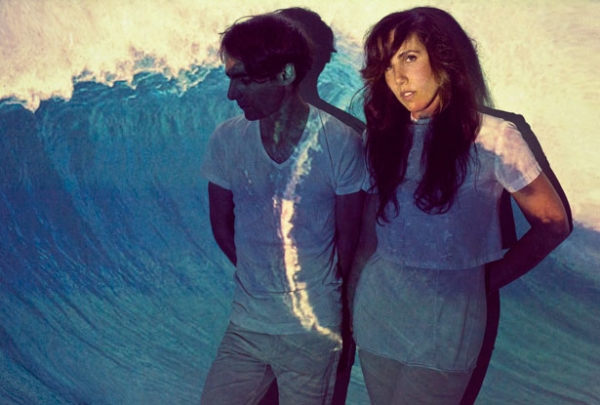 Back in 2008 Snowblink (a.k.a. singer Daniela Gesundheit and a varying cast of backing musicians) appeared seemingly out of nowhere on the Daytrotter Sessions and recorded a few tunes that kept to the quintessential Daytrotter vibe. Sparse, mellow, and pretty, they presented singer Gesundheit’s ear for melody, and the tremendous range and purity of her voice. But the session’s song titles, such as ‘Sea Change, None, Heckling the Afterglow’ suggested that the Gesundheit’s ambitions were greater than simply to create passably enjoyable folk music.

Inner Classics, the third album under the Snowblink moniker, is the sound of a musician stretching to meet her ambitions. At its core it is still a folk album reliant on Gesundheit’s redoubtable voice and gently strummed guitar. But she and her band have piled on a wealth of instrumentation, from the obvious next steps: steel guitar, piano, layered boy-girl vocals, to the unexpected: glitch electronics, Moog bass, generous helpings of reverb, and drum machines.

Amidst the experimentation, Gesundheit’s voice remains the focal point, capable of propelling songs forward through sheer resonance – notably on ‘Goodbye Eyes’. The easiest musical comparison lies in Marissa Nadler, though Snowblink aren’t aiming for the same claustrophobic tension as Nadler’s Little Hells, but rather a sort of quiet pensiveness. Gesundheit’s lyrics are delightfully original, springing from the natural world sea, hills, whales and birds, trees, dust. “Don’t forget you’re made of earth son, earth is three parts to one, deep dark water” she sings, like an incantation, in ‘Pray for Surf’.

‘Best Loved Spot’ is a small world unto itself, and the standout track of the album. It is a building, growing, evolving epic that moves through a series of seemingly disconnected verses and bridges filled with ambient drones, intriguing electric sounds, a bit of Beach House for good measure, before pulling the strands together into a glorious, joyous, maelstrom of a chorus.

Although the rest of the album feels a little too fragmented to live up to the ecstasy of ‘Best Loved Spot’, it is filled with surprises. Each song is a distinct animal, moving from the quirky gallop and moody synths of ‘Black and White Mountains’, the near-a cappella mantras of ‘Pray for Surf’ reminiscent of Surf’s Up-era Beach Boys, the odd percussive beats and piercing tones of ‘Goodbye Eyes’, and the mystical-sounding chants and charming balladry of ‘Buttons’. Some of the later tracks touch a little too close to schmaltz, but in general, the album is testament to an ambitious and creative artist not content to sit comfortably within the boundaries of pretty folk music. Inner Classics is a rewarding experience and a tribute to Gesundheit’s restlessness.