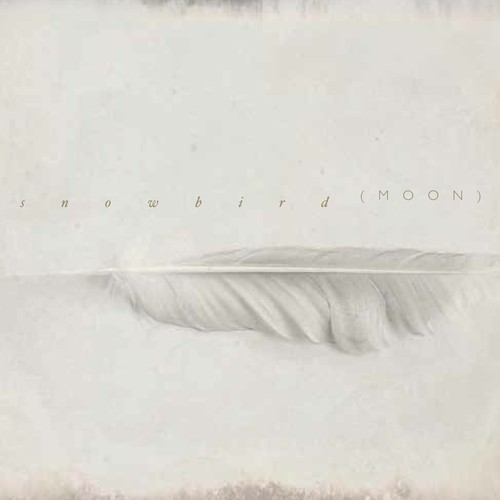 As a child, one of my first emotional responses to a song was watching Fievel and his sister, Tanya, sing “Somewhere Out There” to each other, though apart, each staring out at the moon in An American Tail. Isn’t that one of the wonderful things about the moon? Once the day has gone quiet and dark, you can stare out at it knowing one you love may be staring out at that same moon at that same moment. Such was the birth of Snowbird’s Moon. Simon Raymonde, late of the Cocteau Twins and headmaster at the Bella Union label, composed the piano melodies to these songs – one per night, exclusively inspired by the moon light spilling through his window – emailing them across the Atlantic to singer/songwriter – and apparent unicorn and fairy loving knitwear designer – Stephanie Dosen, Bella Union client and his romantic interest at the time, to lay down the lyrics and vocals.

Any parallels between Dosen’s vocals and those of a certain front woman from Raymonde’s former band are no mere accident or coincidence. Raymonde readily admits that he’d find it “odd if it didn’t remind people of the Cocteau Twins;” Dosen’s vocals are often uncanny to Elisabeth Fraser’s otherworldly upper register, though rarely touch the lower register intensity and soulful near scat singing Fraser was so adept at turning to on a dime. So, Moon is a pretty airy affair, and Dosen’s lyrics are unsurprisingly a tree-hugger’s dream, consistently paying homage to our Mother Earth rather than the album’s namesake celestial satellite. While the guest contributions that flesh out these songs and Raymonde’s knack for understated melody are essential to Moon’s success, Dosen is unquestionably its unassuming all-star. Might her vocal arrangements easily and quickly have become tedious and overbearing and her lyrical themes chintzy were she of less capable hands. Imagery of and metaphors involving woodsy spaces and forest critters abound, which could have easily presented themselves as wooly, hippie-chick silliness, but Raymonde and Dosen execute it all with sincere and flawless beauty.

Dosen expertly crafts a whirlwind of layered vocals that, despite their prevalence throughout the album, never cease to impress as she deftly knows when to push and pull them for maximum effect. Simply witness the layers melt away on “All Wishes Are Ghosts” as Dosen singularly pleads, “stay here, my darling, stay here,” and once her aching plea is firmly planted in your ear, she gently gift wraps it all up again in her billowy layers. On a pair of the album’s sparest songs, “Porcelain” and “In Lovely,” Raymonde’s piano, like a ballerina, glides and suspends, in turn, as Dosen impeccably matches each movement. Her voice and words, “you stand so still, your hands and fingers made of porcelain, holding me,” palpably and tangibly convey the former’s fragility. Lo, singling out highlights, however, is futile – the stark weightlessness of “Amelia,” to the shrouds of shimmering guitar draped over the dream-pop waltz, “Come To The Woods;” Dosen’s tremendous, jam-packed lyrical runs in “Bears On My Trail” to the warmth of the trumpet etching “Heart Of The Woods’” melody, there is nary a crack in Raymonde’s and Dosen’s formula here.

Given the exceedingly specific and personal circumstances that resulted in Snowbird’s existence and Moon’s unique genesis, coupled with both Raymonde’s and Dosen’s otherwise busy musical and non-musical careers, one wouldn’t be remiss in assuming Snowbird and Moon may ultimately prove to be one-offs. Should that be the case, the duo have left us with an unerring testament to the power of nature; their potential lone shot at glory resoundingly nothing but back of the net.

Stream the album in full here.