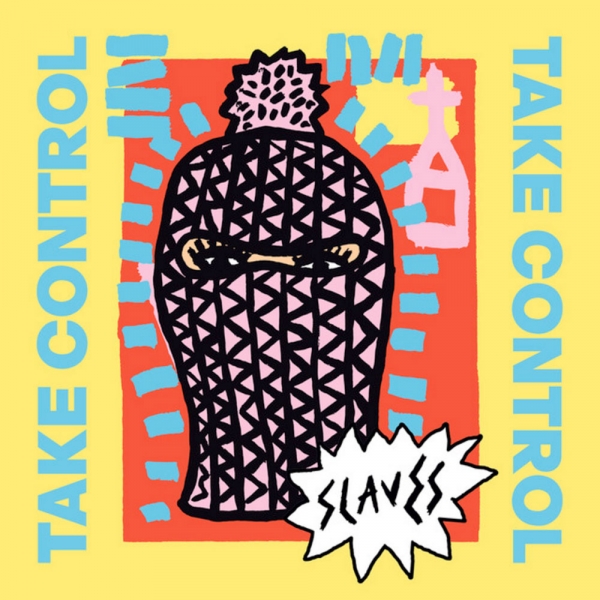 Slaves’ second album Take Control begins with some advice for anyone disgruntled at their lot in life. Amid the jabbing crunch of frantically building guitars, stand-up drummer and vocalist Isaac Holman, snarls his way through the opening chorus in furious rejection of the status quo: “Sucking on a sour sweet, Blisters on your tongue…Spit it out.”

A year after the release of their debut Are You Satisfied?, it's clear the punk duo aren't stumbling on inner peace anytime soon. Unbridled rage isn't something you hear a lot of on mainstream radio yet Isaac and guitarist Laurie Vincent, two mischievous, tattooed, fashion-savvy lads from Kent have made the jump from dirty pubs to BBC Radio 1 A-list with ease. And they've won themselves some fans in high places in the process: to record Take Control they decamped to Santa Monica, roping in Beastie Boy Michael "Mike D" Diamond on production duties. The result is an album worlds away from the scrappy sound of 2013 EP Sugar Coated Bitter Truth, but that captures the raw, primal intensity that got them to the festival main stages. Yet even under the blazing Californian sun, Slaves' combustive racket of garage riffs, soiled with equal whiffs Boy Better Know and Sham 69 couldn't be anything but British.

For the most part, Take Control doesn't mess with that formula. “Same Again”, “Lies” and “Play Dead” are all simple, brattish stormers that stomp with rampaging earworm riffs and choruses, as frequently silly as they are incendiary. Isaac and Laurie’s sardonic observations are never quite as political as they first appear - let's leave the really bleak stuff to Sleaford Mods - yet Slaves make it clear they're artists with a message. Don't just put up with the hand you've been dealt. If you hate what you do, do something else. You are not stuck in traffic, you are traffic. Move!  From the rampant “Hypnotize” ("video games eating your brain... I'm dribbling"), the title track's aggressive call to arms ("I'm sleeping while I'm walking - take control") to “Rich Man's” palpable disgust for the yuppy elite ("I'm not your bitch man"), Take Control colourfully, and often cartoonishly, blazes with a refusal to accept the monotonies of everyday life.

Elsewhere though, Slaves are pushing their sound in new directions. Wolf Alice’s Joel Amey pops up to lend drums on the squelchy “The People That You Meet” while Isaac indulges in some storytelling atop a macabre bassline. Mike D's influence can be heard on the robotic, muscular beats of “STD's/PHD's” and perhaps most clearly on jagged Cramps-esque highlight “Consume or Be Consumed”. It takes brass balls to go up against a Beastie Boy, yet on the latter Isaac picks up where their cover of Skepta's "Shutdown" left off, rapping the verses before Mike D takes over. But the album's bravest curveball comes from the hazy, synth driven melody of “Steer Clear” which features kitchen sink laureate Baxter Drury. Over Baxter’s deadpan croon: “Please don’t kill yourself, behind that steering wheel,” Slaves offer up a moment of wistful vulnerability amid all the dirty, heavy fun. It turns out they can impress on all four fronts.