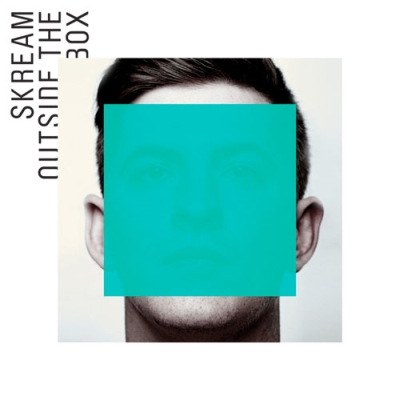 With limited knowledge of SKREAM and no access to the internet to check out his previous goings on, listening to Outside the Box was a bit of a liberating experience. Listening to an album without the habitual prejudices formed by press hype, knowledge of previous works and general genre bashings, is an all too rare occurrence in this digital age, but one I would openly recommend.

A thoughtful mix of back breaking beats, bassy synths and reminiscent melodies led you serenely into the album via a chilled little tune called ‘Perferated’. After the initial euphoria of the opening track, ‘8 Bit Baby’ couldn’t help but fall a little short, yet it was soon rescued by the down tempo bone-shaker ‘CPU’ whose echoing loops, phone tones and auto-tone brought the track to its heady climax.

‘Where You Should Be’ heightened the pace a little, and with it’s commercial melody/lyrical combo and Sam Frank starring, it will no doubt be remixed into an upbeat floor filler. Another likely suspect to grace the dance floor of la discotheque is ‘I Love The Way’, and shows the first vocal strength on the album. It’s a suspense builder, and after a couple of minutes of waiting for that all important crux, it drops.

‘Fields of Emotion’, far from conjuring up nostalgic imagine of hazy days spent with the boy next door in the meadow, proves itself a minimalist mix of dubby beats and jazzy melodies. Perhaps this wouldn’t, at first, strike you as the ideal mix, yet the timing of each emphasizes the beauty and competency of the other. This highlights one of the most successful components of the album – its contrast between thoughtful evocative tunes and some darn right meaty bass. Enter ‘Wibbler’. Its unrelenting clash of beats, percussion and laser noises are perhaps not polar opposites to the minimalistic ‘Fields of Emotion’, but they certainly wouldn’t sit on the same table in the canteen.

I suppose I better mention that La Roux makes an appearance, but perhaps the less said about that the better… All in all it was a pretty well thought out album, and whilst it isn’t of the jaw dropping variety, it doesn’t fail to get you in the mood for a grimy rave or two. Though it borders quite heavily on the commercial side of the fence, it’s nice to go to the dark side now and again. Especially when it’s for something as satisfying as Skream.