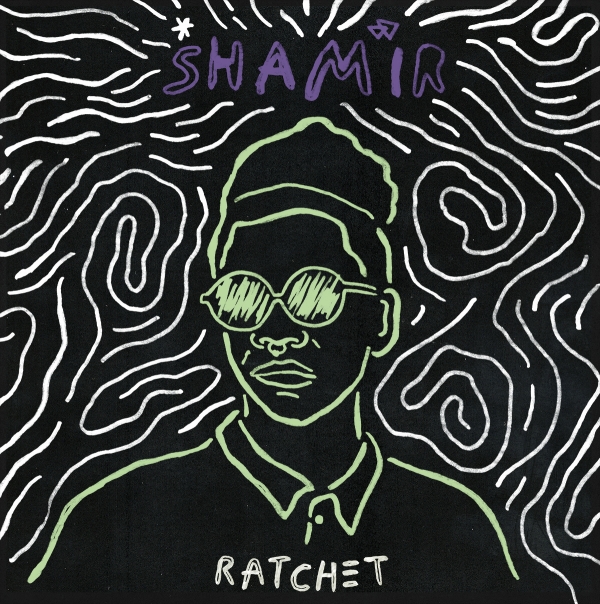 ​Androgynous. Thin, pretty. Childlike. Smart-aleck spazz. Post-gender. Most Likely to Appear on the Cover of Vogue. Even before Shamir Bailey, the twenty-year-old phenom behind Ratchet burst out of nowhere — I mean this as literally as possible: he hails from North Las Vegas, a suburb that shares very little beyond a name and geographic proximity with the famous neon strip to the south — with last summer’s Northtown EP, people have been trying to put him in a box. A long parade of descriptors has been applied to Shamir and his voice, many of them apt yet insufficient, often hinting at the two central points of discussion surrounding him since.

One of these is his origin story: Shamir famously emailed early demos to GODMODE Records label boss (and Northtown and Ratchet producer) Nick Sylvester only to find himself on a plane to New York less than three months later. The other is his androgyny. Lost in all this was the EP itself, an intimate five-song affair that boasted a DFA-inspired breakup anthem (“If It Wasn’t True”), a spare, heartbreaking open nerve masquerading as a song, forever on display (“I’ll Never Be Able To Love”), and a stripped-back cover of a Lindi Ortega country ballad (“Lived and Died Alone”). Over the course of its twenty-minute runtime, Northtown looked back at Shamir’s musically omnivorous youth fondly; it also betrayed an ambition that went far beyond the light industrial zoning and pig farms of his hometown: to the beaches of Los Angeles, perhaps, or to the towers of Times Square.

And that’s where we pick up on Shamir’s excellent debut LP Ratchet: with the desert spreading out beneath the neon headlights of “Vegas”. The introductory track finds Shamir’s feathery voice piloting a slinky, throbbing undercarriage out for a night drive. It’s a road lined with horns that pop like stuffed shovel-nosed snakes from a tin can, with synths that give a sense of audio palinopsia, as though glimpsing a glitzy casino sign from the corner of the ear in passing. It’s the sound of a sinewy muscle car pieced together from subtly extravagant parts leaving Northtown behind, kicking up dust on its way to a city “where sinning’s alright, at least at night.”

In other words, “Vegas” is as good an indicator as any of the sometimes alien, nearly always alluring sounds to come from Shamir and Nick Sylvester in the nine tracks that follow. It’s nigh impossible to separate one from the other in any discussion about Ratchet. Shamir is unquestionably the star, but the interplay between artist and producer is palpable; it’s a musical match made in heaven (or, perhaps, hell: Sylvester has likened his role to the relationship between the poet Virgil and his protagonist Dante), and the finest moments here have Sylvester providing the trampoline for Shamir to bounce on.

In an early moment of synergy, Sylvester waits just long enough for Shamir to ask “Why not go out and make a scene?” before launching the cheap firework synths that form the chorus. A single horn becomes an army soon joined by a swaggering synth line and fine funk guitar accents on “In For The Kill”; it’s the perfect vehicle for Bailey’s thin, gliding voice, which manages to soar to new heights on the instantly-catchy chorus courtesy of the Saturday night heat beneath it. On “Demon”—the better of two ballads on the album, and perhaps the most lyrically revealing of any track—a flickering Lite-Brite synth gives Shamir’s tale of religious turmoil and a doomed relationship a glorious air of nostalgia, and the violin that joins the song’s second half matches the sentiment and raises the stakes.

“Youth” pits his whispery, delicate verses against insectile buzzing and chirping before exploding in a disco-meets-gospel bridge that allows him to go full Donna Summer, all yearning, moaned overdubs in the church that Chic built. The closing track is “If It Wasn’t True” 2.0, complete with synths exploding out of the chorus. As on many of the songs on Ratchet, however, Shamir finds himself in a different phase of heartbreak than he did on Northtown, with his “head in the clouds, never coming down.” Breakout single “On The Regular” prominently displays a newfound confidence in the most overt example of genre and gender bending here, recapping Bailey’s origin story with slick, charmingly smug rhymes that evoke Missy Elliott and Azealia Banks. “Call It Off” is a new breed of breakup anthem, Shamir playing honest friend and anti-matchmaker: “just can’t make a thot a wife, no more basic ratchet guys.”

Bailey and Sylvester so rarely outsmart themselves that the rare misstep is glaringly obvious and unsettling in context.  The music occasionally careens from kaleidoscopic to claustrophobic, and the often-masterful production flourishes can begin to feel less like threads that tie the tracks together and more like well-worn tricks picked from a limited bag. Modulated vocals, though effective at times—see the knowing, sinister wink they provide on the aforementioned “Vegas”—are overused, leaving the listener wondering if they’ve altogether replaced the charming organic harmonies that helped to lend the largely spare songs on Northtown some weight. The synthetic basso profundo only furthers the feeling that “Hot Mess” is the extended dance mix of an idea better left on the cutting room floor in the first place.

Ultimately, however, this is an album held together not by cotton candy quirks or the clang of cowbell, but by the inimitable Shamir being Shamir. Though his voice has been compared to that of Civil Rights singer Nina Simone, and the disco that gives this set its danceability once sparked a fire that burned beneath white, heterosexual male culture in the 60’s and 70’s, Shamir is a timely revolution unto himself, “no gender, no sexuality, and no fucks to give.” You can set aside your boxes. Chin up, eyes out, Shamir looks ever outward on Ratchet, staking his claim as the foremost purveyor of future pop for future people. People like Shamir. People like you and me. Just people.