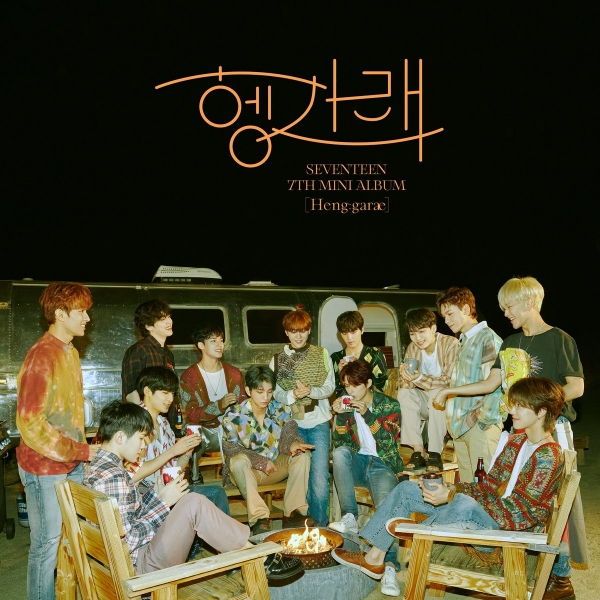 SEVENTEEN are a group known across the k-pop industry as the ‘self-produced idols’.

Since their debut in 2015, vocalist Woozi has written and produced each of their tracks, often with contribution from other members, and their choreography has largely been created by their performance team leader, Hoshi. This has contributed to the group having a very distinctive sound – whilst each comeback they bring something new to the table, there's something indefinable that proclaims: “this is SEVENTEEN”.

Their 7th mini album, Heng:garae follows this pattern, but to a greater extent than ever before. It’s a record that is definitively SEVENTEEN, for sure, but these songs don’t neatly fit into any of the categories the group and their fans – Carats – have defined previously.

Opening with “Fearless”, a direct response to the previous album’s title track, “Fear”. The feelings defined in that song have been overcome bravely, as the group come to a greater understanding of their emotions. It’s a powerful opener, both sonically and as a statement, to this new era of SEVENTEEN.

Fittingly, “Left & Right” is unlike anything they’ve done before – it has an early ‘00s feel, based in retro hip-hop sounds but with SEVENTEEN’s unique colour to it. It’s a song that emphasises the value in trusting your own decisions and revelling in them rather than overthinking. It’s the perfect title track for an album that throws out the rule book, just as the group do in the music video, and encourages listeners to do the same.

“My My” continues this theme of self-belief and choosing a different path than the one laid out for you. Rather than romanticising youth, it’s a song that recognises the challenges and overwhelming feelings that accompany growing up whilst also seeing the excitement and potential in becoming – even amidst the chaos.

“I Wish”, “Kidult”, and “Together” make up the more emotional side of the album, with lyrical contributions from various members – on “I Wish”, Wonwoo and Woozi write about the space between two people’s feelings in a past relationship. It’s “Kidult”, however, that is the album’s stand-out track, with lyrics from the group’s leader and rapper S.Coups. Never generic with their words, always purposeful - “Kidult” truly shines. “Let’s love even the sad part of us that’s hidden”, sings DK, reiterating the idea from “Fearless” of embracing the uncomfortable. It’s a song that builds rapport between idol and listener, as the group express their own honest feelings about becoming ‘adults’ and all the expectations that come with it. They assure their fans that “we resemble each other, we are together”, a genuine and warm promise that nobody is in this alone.

This leads on beautifully to the album closer, “Together”. Using the song to reach out a hand to hold to anyone who needs it, and reinforcing the premise that choosing to walk your own path will lead to greater things than following a prescribed route – “even if the world revolves the other way / we won’t lose our way and we will walk it properly”. The group sing this together, a final reminder that you don’t have to walk that new path alone.

It is, altogether, an album that captures the essence of SEVENTEEN. Throughout their career they have been trailblazers: when they debuted with the fun, fresh "Adore U”, it was amid droves of ‘edgy’, brash concepts, and they remained steady in their choices to do make something their own. It’s also a record filled with warmth, genuine love and respect for their listeners, which has always shined through in everything they do. These are songs that will be there to cheer you on – some loudly, some quietly, but always undeniably.