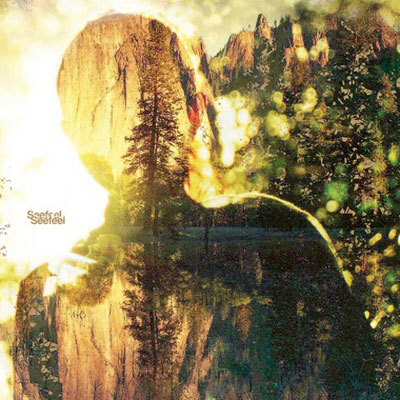 A diver moving fluently and gracefully through the crystalline water. An eagle spreading its wings and gliding soundlessly through the sky. Two skaters floating across the ice. These are clichés, but clichés can be useful, and any critic looking to evoke the sense of effortless and frictionless beauty conjured by Seefeel‘s splendid Quique would be tempted to recycle them. Seventeen years after Quique‘s release and almost fifteen years after they decided to take a sabbatical, Seefeel have recorded a new, self-titled album. Things have changed, however, and while some of us only recently fell in love with the group’s old sound, they’ve moved on. This time around, the diver is running out of oxygen, panicking, frantically clawing his way towards the surface; the eagle has swooped at a terrified rabbit, talons sharp and deadly; the skaters are off-balance, tumbling towards the cold hard ice, bracing themselves for impact. Seefeel is a difficult listen, and this isn’t always a good thing.

Many of the elements that made the band’s earlier work so compelling are still in place; they’re still intent on wringing unusual sounds from their guitars, and Sarah Peacock’s vocals still resemble someone dreamily singing songs of love from deep within a K-hole. They still sound, as they did when they became the first guitar band to sign with Warp Records, like an electronic act who happen to utilise traditional rock instrumentation. At the same time, something has changed; those elements are being put to a different use, and the group’s sound now has stronger aesthetic ties to ‘Gantz Graf’ than it does to ‘Roygbov’. There’s an abrasiveness to Seefeel, a harshness and, at the same time, a deliberate sense of uncertainty. Guitars buzz and hum angrily, like an increasingly exasperated wasp flapping about inside your stereo. Aggressive synthesised sounds stomp angrily onto the album, then abruptly turn on their heel and march out again; together with the (presumably intentionally) leaden, dead-weight drumming on tracks like ‘Dead Guitars’ and ‘Rip-Run’ these stop-start sounds lend the album a slightly halting feel. The handful of unexpectedly pretty moments, such as Peacock’s contemplative vocal on ‘Airless’, accentuate this by interrupting the album’s flow even further. Whereas listening to Quique is a deeply hypnotic experience, Seefeel is only ever immersive in the sense that being pushed into a pool full of arsenic is immersive.

It’s difficult to criticise a band for refusing to simply recreate past glories, and god knows there’s nothing wrong with deliberately sabotaging your own formula in the interests of artistic change. Portishead did precisely that recently, with great success, and nobody who reads The Line Of Best Fit would care less about Radiohead if they’d kept on writing records which sounded a bit like Pablo Honey for their entire career. Unfortunately, in messing around with their own template, Seefeel have lost the element that made them most compelling, their ability to submerge the listener in an engrossing sound-world. Seefeel is always intellectually interesting, and students of odd guitar sounds will find much to enjoy, but it always holds the listener at arm’s length, fearing emotional contact. So, to an extent, did Third and Kid A, but there’s an important difference: the songwriting here just isn’t as strong. Too few ideas are stretched over too many minutes; tracks dawdle and linger longer than they should, and aside from ‘Dead Guitars’ and the rumbling ‘Faults’ there’s little that grabs the attention. A minor disappointment.