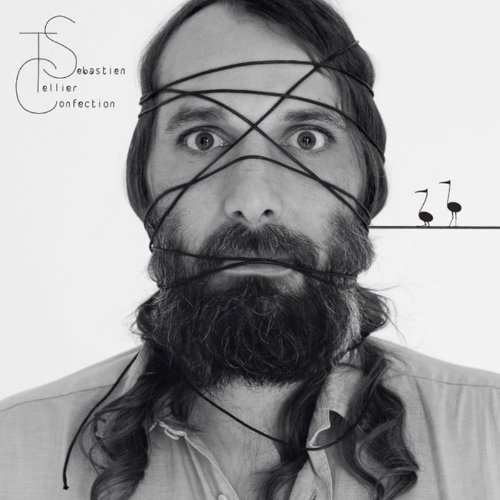 France’s bearded electro king Sébastien Tellier returns to our ears after a brief intermission since last year’s lauded My God Is Blue, with fresh LP Confection. Don’t get any notions of Tellier veering towards bubblegum or gallivanting with stevia-sweet sounds; this is a broad, sprawling exploration of the sonic arts. Similarly, don’t expect candied vocals (in fact, it’d be prudent not to really expect many vocals at all) or a pop glaze as Confection is more akin to an electronic symphony, or the OST to a dramatic fantasy film never brought to fruition. The atmospherics are a law unto themselves on this, Tellier’s fifth full-length.

Much of the album is divided into neat’n’tidy movements. There’s “L’amour naissant”, “Delta”, “Coco”, “Adieu” (which sounds a bit like an opera by Ratatat) and “Curiosa”, which together comprise over half the record. As much of the instrumentation is reserved to strings, woodwind and classical keys, there’s a strong urge to slap a particular label of neo-classical upon Confection. There is a semblance of truth in that, but the record goes above and beyond the realms of a concert hall or strict, archaic musical indoctrinations. There is a stringent cinematic quality to Tellier’s compositions. Classical music and film scores do have a tendency to overlap, but on this LP, the music errs towards the latter – sweeping synths, exotic percussion and the odd vocal refrain ensure that the noises aren’t stuffy, dour ruminations on sound, but rather something to accompany a vivid, imaginative visual. Despite the lack of vocals and lyrics, Tellier is telling a story.

The aforementioned “L’amour naissant” segment of the record is one of the livelier portions. With jazzy lounge beats (from prior Tellier collaborator and Fela Kuti pal/Afrobeat pioneer Tony Allen) and suave piano riffs, it’s got a significant pulse. There’s flourishes of swooning strings, but the domination wreaked by funkadelic basslines and Tellier’s whisper-cum-croon snatches the focus. In the first ‘movement’, we see a desperate energy. As the track morphs into “L’amour naissant II”, the strings are more prominent. More distraught. The piano, once bounding with a spring in its step, now bawls tearfully over glacial shards of synth and desolation. The third instalment deviates from both, exacerbating the funk-lined nature of the collection, and careening headlong towards soul or Motown. It’s more Ed Banger (with the addition of weepy, doe-eyed violin/cello swooshes) than you might expect. The entirety of “L’amour naissant” aren’t glued in order though, they, like “Adieu” and “Curiosa”, are scattered seemingly at random. The reprisals build on the original motifs, much like music in a film does as the action wears on.

Other cuts, specifically the two that don’t adhere to a suite, are simply stellar. “Hypnose” is a whirlwind-ier affair. There’s smidgens of trance in the backing pads, and John Carpenter buzzsaw leads. There’s a “Moonlight Sonata” vibe being channelled – it’s an oddly romantic effort. “Waltz” is a bizarre 8-bit glitchfest of carnival synths and carousel fantasy; it’s like a German oom-pah group stole some Moogs.

Tellier’s Confection is an experimental anthology. It’s not entirely what you might expect, and there’s no doubt it won’t be to everyone’s taste. He’s not making any sincere attempt to replicate the success of tracks like “La Ritournelle” – it seems like Tellier is inhabiting a more intimate space. Though it mostly lacks lyrics, it still feels like a very personal set of arrangements, that for some reason or other, he now feels like sharing with the world. That said, and even though the music is intoxicating, you can’t help but feel slightly left in the dark. Where it’s such a visceral, visual record, there needs to be some context, some narrative of some kind; you can glean emotions, but no plot. In Tellier’s reticence, it has the tendency to meander in the background if you’re not giving it undivided attention. Perhaps, in the future, we’ll figure out what he’s trying to do and/or say. Maybe he’ll make the film that this score is clearly designed to go in tandem with. Let’s hope he fills in the gaps soon.