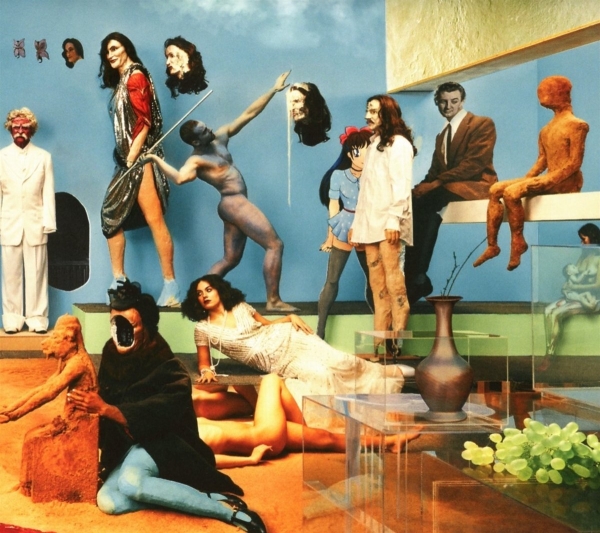 Technology, much like Digoxin - the cardiac medication name-checked on Amen & Goodbye’s adventurous, lead single, “I Am Chemistry” - has a narrow therapeutic range. Too much of either and the results are, potentially, toxic.

Experimentation with technology had previously been vital to Yeasayer’s creative process. Yet upon commencing sessions for Amen & Goodbye, the three-piece found their reliance on technology, “psychologically exhausting” and thus decided to record, as a band, directly onto tape. It was only through disaster and the near-destruction of their tape recorder however that prompted the band to re-embrace the digital and de- / re-construct the plethora of sounds salvaged from those initial sessions. The result is a record, which not only finds Yeasayer’s use of technology within therapeutic range, but also documents a vivid synthesis of the analogue and the digital to create Yeasayer’s most luscious work to date.

The dynamism of those “analogue” recording sessions is omnipresent throughout and serves as one of the record’s greatest strengths. Tracks flow organically, and for the most part, rebel against traditional pop structures. “I Am Chemistry”, for example, moves freely between locomotive guitars; voyaging synthesisers; and a multi-layered, choral but alien vocal from Suzzy Roche of The Roches. Likewise, “Half Asleep”, reminiscent of Yeasayer’s early work on All Hour Cymbals, opens with a shuddering snare, before bursting to life with horns, vocal harmonies and an understated, bass groove from Ira Wolf Tuton.

Yeasayer’s sonic palette has also been dramatically bolstered. Live percussion, in all forms (from springs to chopsticks), underpins the majority of the tracks found on Amen & Goodbye, adding a beneficial kineticism. Furthermore, Yeasayer utilise field recordings and concentrate on gorgeous multi-part vocal harmonies to successfully create hypnagogic soundscapes. The beguiling “Daughters of Cain” and meditative “Prophecy Gun” are both enchanting and dream-like examples of the record’s powerful, transportive capability.

Rather than fully re-inventing the wheel, Yeasayer have found a harmonious compromise between novel experimentation and re-exploration of the finer moments from their previous three records. One is never far, for instance, from the rambunctious, avant-garde pop music that characterised much of 2010’s Odd Blood. “Silly Me” is infectiously boisterous with its pogoing synthesisers. Deceptive at first, the track opens with broken-mattress-spring twangs, before exploding into an immediate, technicolor chorus and mid-section of rousing horns and percussion. The exuberant pomp of “Dead Sea Scrolls”, also repositions Yeasayer as a psychedelic barbershop trio, complete with “ba ba ba bah” vocal harmonies. Featuring a ménage of clanging percussion, distorted solos and sci-fi synthesisers, “Dead Sea Scrolls” emphasises Yeasayer’s ability to craft unique and joyous pop songs.

In conjunction with the soundscapes found on Amen & Goodbye, Yeasayer construct their imaginary universe with the aid of mystical imagery and lyricism. Touching upon reoccurring themes of religion, transcendence, the natural world and the molecular, the record possesses a fable-like quality. Interestingly however, Yeasayer find pure beauty and mystery not through the grandiose themes of transcendence or divinity but through universal aspects of the human condition - fatherhood and death - as found on “Uma” and “Cold Night” respectively.

“Uma”, a tender, theremin-sounding-led lullaby, finds Anand Wilder ruminating over parental fears and the unconditional love a parent-child relationship possesses. Moreover, the emotionally devastating, “Cold Night” is one of Yeasayer’s finest moments to date. Reflecting upon the death of a close friend, “Cold Night” sees Yeasayer at their most human and most direct. Its tone is set almost immediately as Wilder longingly sings, “It’s been one year since you turned yourself back into dust”. His voice throughout “Cold Night” is a potent, affective weapon, fecund with emotive tone, wonderfully unafraid of its vulnerabilities and imperfections. His voice strains and cracks - overcome with regret - through a stirring chorus of piano motifs and sumptuous harmonies, as he sings, “Is there something I could have told you/To carry you through the cold night”. The purity of Wilder’s vocal performance is a triumph, a brilliant jewel, hidden at the very depths of Amen & Goodbye’s overflowing chest of treasures.

Wilder’s vocal on “Cold Night” represents only the zenith of his impressive repertoire found throughout the record. His dulcet vocal continually delights with its quality and captivating capability for storytelling and translation of emotion. On “Divine Simulacrum”, for example, he delivers a plaintive vocal before skilfully weaving a yearning, serpentine falsetto amongst bombastic, reverberating drums.

At points, Amen & Goodbye does stutter. The three, counterintuitive interludes (“Computer Canticle 1”, “Child Prodigy” and “Amen & Goodbye”) found on the record have minimal purpose and only slow the momentum generated by the preceding tracks. Likewise, although “Half Asleep” comes to life in its latter half, its languid opening is bereft of the wide-eyed ecstasy of “Silly Me”, thus causing an unavoidable comedown. Unlike “Half Asleep”, “Gerson’s Whistle”, the longest track found on Amen & Goodbye, fails to grow in stature and with its clumsy acoustic guitar breakdown, the track proves to be the record’s lowest moment.

Analogous to levels of Digoxin within the bloodstream, an album can have its own therapeutic range. Toxicity can occur, when an artist or band are overzealous with ideas, thus leading to an incoherent, confusing body of work. Conversely, a lack of inspiring ideas can lead to a record that is insipid, cumbersome and essentially sub-therapeutic to the listener. With the aid of deft production and mild restraint, Amen & Goodbye is well within therapeutic range. Its hybrid of analogue and digital techniques have allowed Yeasayer to create their most enthralling and satisfying record to date.