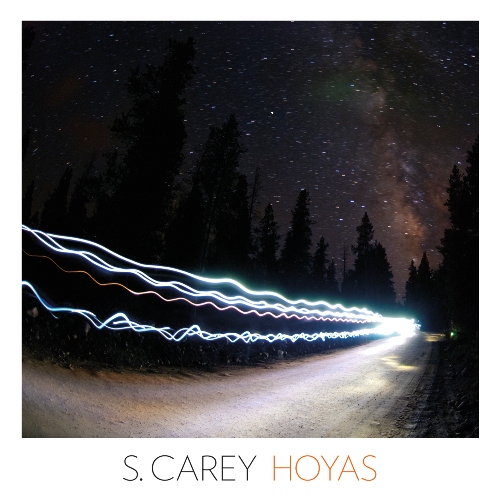 The result of an experimental exploration of textures and sounds, Sean Carey’s follow up to the well received full length debut All We Grow (2010), was never really intended to be made. “It was so unplanned it was funny,” he reminisced about the project. The Hoyas EP released simply as S Carey was recorded alongside Ben Lester (of AA Bondy) and Brian Joseph (of the Bon Iver touring band) with little more than a laptop and four microphones set up in Carey’s lo-fi attic studio.

With a performance degree in classical percussion, the Bon Iver drummer’s own branch of sonic experimentation takes a step away from his work with Justin Vernon; trading in the vast array of instrumentation his Wisconsin counterpart employs to allow for a stripped-back palette of sound. Although fewer instruments are be employed however, Carey adapts to this, finding sounds in anything close at hand and so the EP represents this juxtaposition between the glitchy generated beats of the laptop and the more earthy, naturalistic tones of his homemade woodblocks.

‘Two Angles’ is all blissed out synths and taps, with echoing vocals later joined by swelling strings and maudlin fanfare horns. This, alongside the following track ‘Avalanche’, is arguably the EP’s standout, best displaying Carey’s mix of classical and contemporary. ‘Avalanche”s exploration of these disparate textures of sound produces a complementary and all-encompassing dreamy soundscape, as glacial piano chords accompany – and are juxtaposed with – the fuzz of synthesized beats.

The immediacy of the two openers somewhat casts a shadow over the second half of the EP, with ‘Inspir’ losing some of the elegance of the preceding tracks. Over-autotuned vocals make the lyrics often hard to decipher, and while this is perhaps not the essence of the recording – which is, rather, centred in the mood created and what Carey defines as a soundscape recording of escapism “for nighttime driving, long exposures of stars, the cold rock at Big Falls…” – it nevertheless still slightly hinders its reception in some instances. This aside, in capturing a sound which nods to the expansiveness of night rides home, the open sky and the open plains, Carey certainly succeeds; the stretching silences, marked by the ambient electronica melded with subtle horns and strings, resulting in a dense haze of instrumentation given a free rein and endowed with a simplicty of structure.