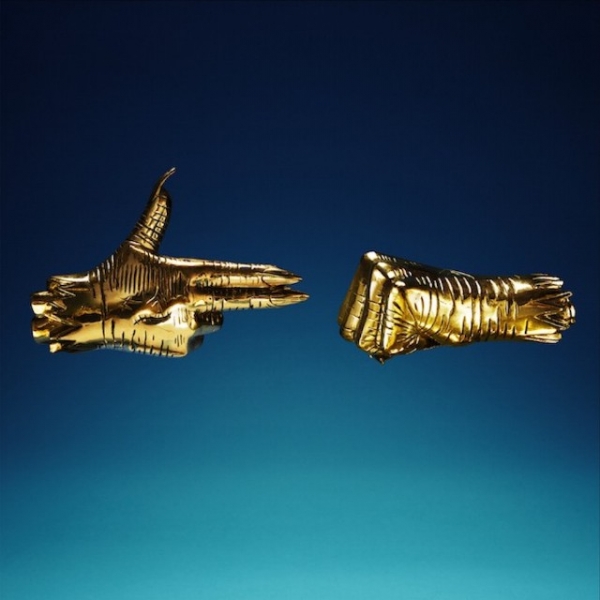 Having originally been billed for a mundane mid-January release, Run The Jewels – i.e. titanic superduo Killer Mike and El-P – surprisingly decided to bring the release of the much anticipated RTJ3 three weeks forward to none other than Christmas Day. A Christmas Fucking Mircale, indeed. However, there’s no time for festivities - Run the Jewels mean business as usual.

It was always going to be interesting to see how Mike and El-P followed up the sheer furiocity of RTJ2, and straight off the bat they prove their continued strength on album opener “Down” – an instant highlight that unabashedly fuses crushed optimism (“Even birds with broken wings want to fly”) with a hilarious Jaws reference (“You’re gunna need a bigger boat, boys / You’re in trouble”). What's even more crucial to Run The Jewels' music - and Killer Mike's music in particularly - has always been how politicially aware and vocal they are and how they use this to their advantage - pulling off political music that's actually good is hard to do without looking lame or like you're trying too hard (YG’s “FDT (Fuck Donald Trump)” from earlier in 2016 felt like a lifeless novelty preach to to the choir).

This proves that it's Mike's rare ability to make powerful and relevant political music that sets him apart from the crowd. As a result, Run the Jewels use RTJ3 as a platform to tackle Trump in a more sophisticated (and hilarious) way than YG. First, there’s “Talk to Me” - a track that the duo describes as the “greatest thing” they have done together artistically – with: “Went to war with the Devil and Shaytan / He wore a bad toupee and a spray tan.” and then, perhaps more poignantly, on the album’s standout track, “2100” - released the day after the 2016 election was held – we have Mike sounding uncertain, as if he’s clearing his throat: “How long before the hate that we hold lead us to another Holocaust?”

That’s not to say that Run the Jewels’ music only serves as a political platform, though - they’re never afraid to indulge in some old-skool hip-hop bravado, with El-P boasting on “Talk to Me” that his “dick got a Michelin star”, in addition to “Legend Has It” constantly referring to itself as a classic and the fact that the very existence of “Call Ticketron” is simply for Mike and El-P to daydream about selling out Madison Square Garden – the venue that they supported Jack White in during 2015.

But, it’s not like all their grand-scale ambition is without good reason – Mike and El-P are on the top of their game throughout RTJ3, tag-teaming seamlessly like Kanye and Jay(-)Z on “Otis” or Tyler, The Creator and Earl Sweatshirt on “AssMilk” – they hit verses back and forth as smoothly as a ball in a table tennis rally - so you can’t really blame them for aiming for the stars.

Having said that, it's easy to view RTJ3 as uncharacteristically downtrodden for the most part, with an unenthused El-P even unpersuasively urging to us to “get a job, get a house, get a coffin” on “Don’t Get Captured”. The duo don't show many signs of giving up hope entirely, although we are given the occasional scare.

The best example of this is on the aforementioned album highlight, “2100”, where Mike offers a universal escape to constant worries with the album's most melodic line: “Make love, smoke kush, try to laugh hard and live long / That’s the antidote.” It’s strikingly similar to their “Do dope, fuck hope” mantra from “DDFH” on their eponymous debut back in 2013. It sounds like, after all their campaigning for justice and a better world to live in, Run the Jewels know that any momentary escape will be self-provided.

The album is then brought to a crashing hault with the epic closer “A Report to the Shareholders: Kill Your Masters”, featuring an uncredited cameo from Zac de la Rocha. It could be seen as an unofficial sequel to “Close Your Eyes (And Count to Fuck)” from RTJ2, which de la Rocha also featured on, but instead it acts as the song that brings the RTJ trilogy to a close.

If it’s the killing of the masters that will trigger the revolution, then it’s worth revisiting “Lie, Cheat, Steal” from RTJ2. “Who’s that voice on the side of the phone that shakes and rattles his bones?” Mike wondered. “Could it be the man behind the man behind the throne?” It would appear as if you can put your dukes down momentarily, as RTJ3 confirms – not that it was ever in doubt - that Run the Jewels have overthrown the man as well as the man behind the man, and are now occupying the throne themselves.