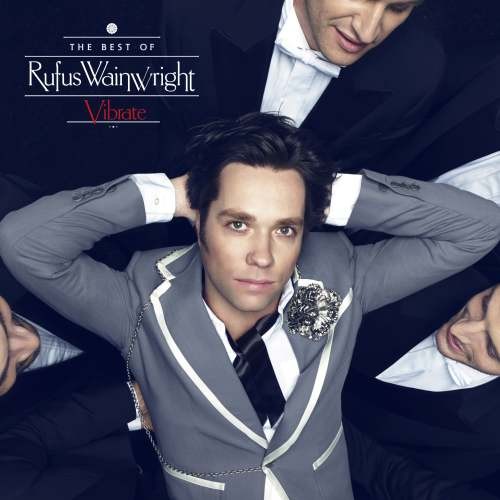 Rufus Wainwright recently turned forty, and as a bookend to his youth, has released a Best Of that is proud, passionate and impressively varied – as well as a fascinating collection of stories. Perhaps because Wainwright’s songs seem often to be fragments of a long memoir – and inspired by opera and musical theatre – his music is particularly well suited to a Best Of, which joins up the strands of stories and ideas in his various albums, to present a substantial and interesting narrative of his life until now, and an expanse of expression and experience.

The classics are all there: “Hallelujah”, “Poses”, “Cigarettes & Chocolate Milk”, “Out of the Game” and “April Fools” – and with them a repertoire of familiar stories of love, charm, heartfelt jadedness and occasional yearning. The album’s lead single, a playful and sultry “Me and Liza” teases elements of Liza Minelli’s own sound and attitude, with a music hall flourish. “Going to A Town”, meanwhile, contains the melancholia and regret that Wainwright sings of so charmingly and uniquely: “I’m so tired of you America / Making my own way home… I’ve got a life to live, America” – there is both regret and an underlying sense of unrequited love, or at least a complicated one. Romantic and political, both the capital ‘R’ and little ‘r’ – he casts an image of a disgraced and tragic ‘home’ that he returns to and leaves in circles. The implications of absurd, homophobic moralizing and the idiocy at its core – “Tell me, do you really think you go to hell for having loved? / Tell me, enough of thinking everything you’ve done is good” – make a song about home, belonging and rejection exceptionally moving and pertinent.

The deluxe version of Wainwright’s Vibrate contains two discs of 34 tracks – combining songs from six studio albums as well as seventeen rare and unreleased recordings, some live, some studio, and including “Chic and Pointless” and “WWII” – both produced and the latter co-written by Guy Chambers. This disc is perhaps the highlight of the album, especially for fans or anyone who is familiar with the better known tracks of the first side. A beautiful cover of “Chelsea Hotel No. 2” is also included on the second disc, having been previously used in the soundtrack to the film Leonard Cohen: I’m Your Man. There are many covers of this song, but Wainwright’s is somehow more fresh and youthful than the rest. Other soundtrack songs released on Vibrate include “La Complainte de la Butte” (from Moulin Rouge) and “The Maker Makes” (from Brokeback Mountain). The latter is especially charming and sad, and although he is not drunk on the record, somehow it seems the kind of song a drunk and regretful person would sob at the end of a wedding, full of whiskey and melodrama (in a good way).

In the best possible way, in fact, this record is defiantly proud, and defiantly discontent. It is full of songs of adoring and missing people, of being in love and in rage, and even if one does not go for the overtly flamboyant and joyful tracks, there is something quite moving about the album as a whole, and the stories wrapped up in a familiar but increasingly intriguing, soulful voice.