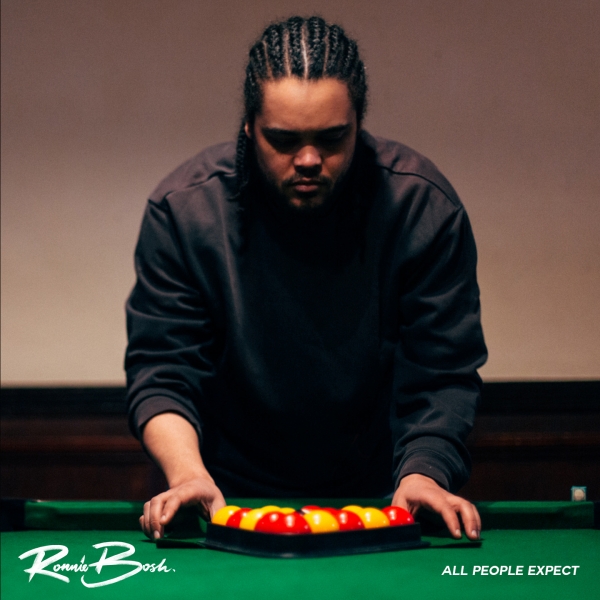 The above quote is from one of my favourite journalists – the blisteringly opinionated Neil Kulkarni – and it’s a sentiment I wholeheartedly agreed with. Within hip hop especially, the conversation about ‘realness’ has always hung around like a bad smell, though few punters appear to be able to define it – sometimes used to bash art which is deemed less authentic, sometimes vaguely levelled at a record’s sound or lyrical content.

But about halfway through listening to Ronnie Bosh’s debut LP, an uncomfortable thought kept surfacing: what if this is the illusive ‘realness’ all those rap bloggers and boorish Q-Tip fans are always banging on about? Because there’s something very pure, very genuine about All People Expect: art that never tries too hard, and seems born from a heart-felt collision of emcee and producer.

The LP's unfussy collection of mostly boom-bap hovers around the 100bpm mark – the unmistakable gait of the MPC beat. Single “100%” is Bosh's grand introduction, with its braggadocio bars and carnivalesque organ hook; “Nothing” has a big Pharcyde vibe to it, Bosh showcasing a hair-raising ability for internal rhyme schemes (“Cycle through the puzzles in your synapses / Climactic / Then suddenly the time lapses / And winds backwards”.) And "Funghi" bounces like a .Paak joint, our protagonist joined by renowned weirdos Lee Scott and Jam Baxter and matching them round for round.

Lyrically, Bosh's penmanship is exceptional and even the most standard 'my crew/rap/dicks's-better than yours' bar rings with finesse ("I make it look labourious / Known to flow like the liquor that you're pouring us / Half-pissed on a touring bus..."). There are deviations, too: “Honourable Death” is a loping rumination on existence, Bosh's talent for storytelling surfacing as he narrates a man's shuffle off the mortal coil. And title track, “All People Expect”, houses a beat that sounds like dying music box, underscoring a brilliant dissection of 21st Century political disillusion. There are rappers whose takes on The State of The World feel academic or try-hard, but again, Bosh's naturalism means his more poetic bars feel almost accidental. (“So yeah, we get the world we deserve / I see them stood atop the hot dirt, what nerve / See I'm not here to swallow what's served / It's the belly of the beast that rots first.”) As always, well-executed bravado is nice, but you can't beat the sound of a macho-of-centre emcee getting a bit emo.

Oh: the beats are fucking great, too. Perhaps better known for his professional wasteman alterego, Dirty Dike has come far as a producer, with a retro sound made distinct by tell-tale, cartoonish hooks. With so much experimentation going on in rap production at the moment, it's dead nice to hear something so simple: Dike writes like he's absorbed all the best bits of classic hip hop – the snares that slap, the creative turntablism, the bass that takes its sweet-ass time – and his palette is a perfect fit for Bosh's breezy delivery.

There are some wobbly moments, no doubt. Fans perspective on “Pulp”, for example, will depend a little on whether they're day-ones. There's certainly a gleeful nostalgia in hearing Bosh's OG crew Contact Play back together again, but perhaps less in the sound of 30-something men dropping bars about licking balls (to be fair, this song also includes the line, “I broke into a student dorm, nicked a blue unicorn / and road it selling coke in my Deliveroo uniform”, which made me spit-laugh all over myself on first listen... each to his/her own, right?).

But – and I say this with a big slab of love for the scene – this is still a UK hip hop record, by an artist who's been floating around in crews and on stages for a decade. If some of that lads-lads-lads humour didn't snake its way in, All People Expect would be a different beast. All in all, a great – albeit remarkably overdue – debut.