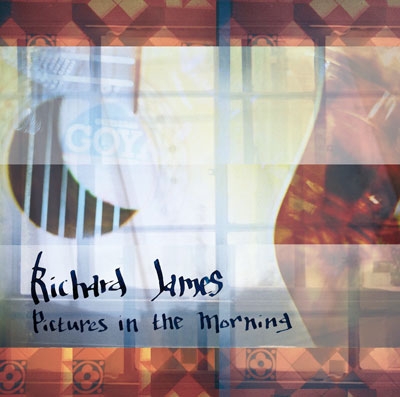 It’s often temptingly easy to believe that those yelling the loudest have the most compelling things to say. Subtlety of expression, slow-burning contemplation and hushed beauty are routinely read as signs of dull introversion. Richard James’ third solo album is fit to batter this daft misunderstanding to extinction.

Pictures in the Morning marks a return to the earthily psychedelic folk-rock of 2006’s excellent solo debut Seven Sleepers’ Den after the noisier, more richly textured terrain explored on 2010’s We Went Riding. Only this time, James has opted to abandon almost all traces of both psychedelia and rock. Consequently, the volume has dropped down to a soft murmur. Built largely on the intricate interplay of beautifully recorded acoustic guitars – listening to the album, it really feels as though you’re in the room with the player(s) – and James’ freshly woken, softly phrased vocals, this is folk music; pure, timeless and borderline allergic to unnecessary adornments.

Pictures in the Morning is also an addition to one of the most overpopulated brackets in the songwriting tradition: the break-up album. Add this to the album’s blanket ban on loud look-at-me antics and its propensity for melancholy introspection, and you’d be excused for assuming we’re faced with a bona fide misery-fest. However, although regret and heartache run rife through the nine tracks, these are nevertheless tunes tailor-made for the bright, warily hopeful morning after the boozy self-pity of the night before has faded. There’s hurt aplenty here, but you can practically feel the sunshine radiating from the gentle, warm melodies that propel most of these tracks.

It’s risky to make music this free of distractions: in the absence of elaborate arrangements, every worn-out chord progression and clunky turn of phrase is immediately exposed and amplified. Thankfully, Pictures in the Morning doesn’t make any wrong moves. Generally speaking, the mood’s best described as the most tender moments of the third Velvet Underground album – due not least to how frequently the guitar patterns reference the classic licks of Lou Reed and Sterling Morrison – transported from the litter-strewn streets of New York to the wholesome beauty of a green valley lit by springtime sunshine.

Downbeat simplicity and bucolic finger-picking dominate, but there are surprises and arresting detail here, too. ‘Sun Ease Pain’ is a free-flowing marathon-length raga-folk workout, whilst the sole “electric” cut ‘Magical Day’ – sparkling with irresistible positive energy – proves good attitude and rocking out can coexist harmoniously. At first, ‘Down to my Heart’ sounds sparse to the point of where it threatens to evaporate altogether, but a few carefully considered additions – a delicate guitar riff, a weepy splash of violin – turn it into a hypnotic highlight.

You might accuse Pictures in the Morning of lacking ambition or fresh ideas. But with tunes the calibre of the opening empty-bed lament ‘All Gone’, you’ve a set of songs arresting enough to make groundbreaking innovation seem like the most hollow gimmick around.