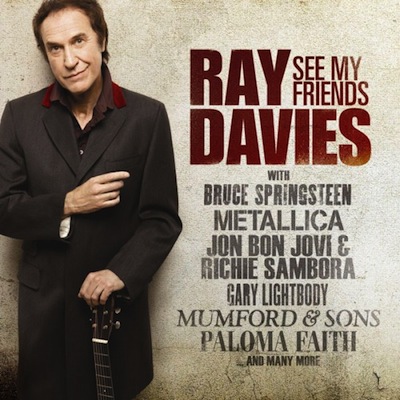 Raymond Douglas Davies is unwell. Anyone who’s seen the latest issue of Uncut, with the former head Kink on the cover, can attest to this. It would appear that, for the retro-minded gentleman who proudly wrote of being a ’20th Century Man’ with the ‘Paranoid Acute Schizophrenia Blues’, life is starting to imitate art; said interview sees him sounding like a nervy relic of a bygone era, waxing fearful about Broken Britain ©, the Big Brother state and how the lyrics of ‘Dead End Street’ – “no chance to emigrate, I’m deep in debt, and now it’s much to late” – now sound more prophecy than pop. Despite the low-key triumph of his last two albums, 2006′s Other People’s Lives and the next year’s Working Man’s Café, his recent records and gigs have seen him confined to revisting his glory days, for better or worse; last year’s The Kinks Choral Collection was a grab-bag of Kinks tracks, reworked with a choir, and while his spirited Glastonbury performance was a heartfelt tribute to original Kinks bassist Pete Quaife, who sadly passed away earlier that week, many accused him of performing like an old man at an open mic night – an unfair criticism, given just how many of his songs have attained standard status.

Where does that leave See My Friends, another bunch of his hits, rerecorded with a strange assortment of chart-botherers and cult heroes? Well, for a start, let’s be thankful for some of the stones left unturned – no one thought to go near ‘Shangri-La’, ‘Victoria’ or anything off The Village Green Preservation Society. Secondly, you can’t help but notice how the two lead-off tracks, co-sung by two of the biggest names on the album, are from the less-visited seventies era; Bruce Springsteen spruces up ‘Better Things’ to the kind of glorious post-Obama anthem of optimism that would have fit right in on Working on a Dream. However, the Bon Jovified ‘Celluloid Heroes’ takes one of Davies’ most complex lyrics – a lonely man gazing across the pond with a mix of cynicism and jealousy at celebrity culture – and sucks all the irony and subtlety out of it using the cultural vaccum that is the wailingly sincere guitar of Richie Sambora. Just thank Christ he left the talkbox at home.

The trouble with See My Friends is the inability to listen to the remainder of its material with a fresh ear; having taken so much joy from the originals, it’s unsurprisingly hard to get enthusiastic about Metallica’s perfunctory take on ‘You Really Got Me’ – a song which in no way benefits from a fingertapped guitar solo – or Amy MacDonald’s take on ‘Dead End Street’, which sounds more cabaret than of Davies’s moves at Glastonbury, especially the pair’s closing cutesy-pie conversation at the end of the track. And while Mark E. Smith’s beloved band of “retarded Irish folk singers” Mumford & Sons emphasise the gorgeous harmonies on ‘Days’, Ray Davies’ aching vocals on the chorus suddenly render all whistles and bells totally redundant – a fact swiftly highlighted by its tactless medley transition into the newly-hip, Wes Anderson-approved album track ‘This Time Tomorrow’. Admittedly, there are a couple of triumphs here: Gary Lightbody’s voice works wonders on ‘Tired of Waiting for You’, adding a delicacy missing from the majority of these tracks, and Spoon’s take on ‘See My Friends’ is a relative revelation, adding jagged guitars and spooky synths to an already trippy track. The biggest coup is an energised rendition of ‘Til the End of the Day’ what might well be the last recordings from the sorely-missed Alex Chilton, who sounds like a man half his age, on lead vocals; meanwhile, ‘This Is Where I Belong’ – an understated, underrated b-side, recently fuzzed up by Yo La Tengo – puts Frank Black’s authoritative whine to fantastic use.

The main fault to find with Davies himself on this record is his notion that See My Friends works as “a natural progression” for the material’s continued proliferation into the world; his vocals across the album sound weary – especially compared to Springsteen’s ebullience or Paloma Faith’s personification of affected quirk – but as the ringmaster of the record, the delivery sort of works. Still, the album as a whole seems like a joyless exercise, and the majority of its backing music sounds phoned in by the most seasoned session pros who could play this material in their sleep –  and most likely was. If anything, you’d have simply expected Davies to come out with an album like this to cash in on his post-Britpop resurgence, but the fact that he’s written some pretty impressive new material since then makes it all seem like regression. Anyone looking for a way into The Kinks should pick up a more conventional best-of, while hardened fans should simply cherry pick the collaborations by the other artists they care about. As for Ray Davies, he should have left his friends – and his back catalogue – alone.