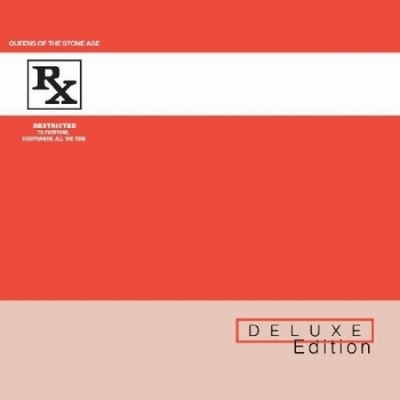 That’s what greeted me when I spun Rated R for the first time, ten years ago, almost to the day, that this Deluxe Edition popped through my letterbox. The first time this burst forth from my speakers I let out a laugh. Sure, there was some nervous laughter as well, this wasn’t, quite, what I was expecting. I’d not been exposed to Queens of the Stone Age prior to encountering ‘The Lost Art of Keeping a Secret’ on a late night MTV show, I can’t remember which. It was a dark, sinister beast of a track. It sounded unlike anything else I’d heard. British bands were still ruling the UK charts, though Brit-pop was on its last legs. This came as a blast of refreshing filth. A rock record with edge. Josh Homme and Nick Oliveri were something alien, rock stars who didn’t pretend, they actually lived this shit. Rated R might have been their break through album, but it was cut with blood, sweat, drugs and alcohol. And QOTSA were never going to recover from it.

Reappraising Rated R seems like a thankless task. It’s one of the all-time great Rock records. The production is superb (this remastered edition makes each track glisten with power). Each song possesses a hulking riff. Homme or Oliveri’s vocals perfectly recounting their tales of depravity and excess. And the best thing is, it’s only 40 minutes in length. It never outstays its welcome providing a bite sized piece of adrenaline. I used to play the entire album before going out. You want to go out drinking in Cardiff till the early hours of the morning? There’s only one soundtrack for that… Rated R. The breakdown halfway through ‘Better Leaving Through Chemistry’, that shifting guitar riff and “angelic” vocal harmonies. The thundering intro to ‘Monsters in the Parasol’ that feels like an articulated track speeding through your veins. Oliveri’s shrieking on ‘Quick and to the Pointless’ sends shivers to the very core. The lazy bar-room intro to ‘In The Fade’ and the sleazy, scuzzy riff that takes over echoing over the “You live till you die” refrain. There’s so many quality moments.

Of course, looking back, it’s easy to spot the signs that this was the beginning the end. Oliveri really was the hell-raiser. Their live shows towards the end of this period descending into farce. It was clear that Homme had plans. He really wanted to create the best Rock band in the world, which he just about created on the follow-up Songs for the Deaf. But whilst that produced some of the best individual songs under the QOTSA moniker, the power and rawness was waning with Oliveri’s increasing excess.

So, we all know the original album is worth your last very last dime, but what about this Deluxe Edition then? Well, the second disc comprises five B-sides and the live set from QOTSA’s appearance at the 2000 Reading Festival. Of the B-sides, ‘Ode To Clarissa’ is an Oliveri led bar-room brawl of a track, all rough edges and menace. ‘You’re So Vague’ is a true disappointment, it’s a bit by-the-numbers even though it’s a spoof of Carly Simon’s hit ‘You’re So Vain’. A typical Homme led rock fest, with some great riffs and a massive sound, but it’s let down by the repetitive nature of the lyrics. The rough ‘Never Say Never’ is more like it, the riff tinkles around the “I might like you better if we slept together” slur as it fizzes and bucks its load. The 50′s Teddy Boy rock ‘n roll of ‘Who’ll Be The Next In Line’ is funny time Frankie, reminding us that QOTSA’s roots weren’t just in the darkness – there’s a twisted sense of humour in there too. Our final dose of history is provided by ‘Born To Hula’, another scuzzy and hulking riff packed track that actually points more towards the forthcoming direction of Songs for the Deaf.

The live set just serves to remind me that I’ve never seen QOTSA live. They’re such a tight live act, the sound is fantastic. You can only imagine how impressive it must have been to have seen them play ‘Regular John’ here. The bass and guitar are truly thunderous, even the vocal harmonies are tight. ‘Better Living From Chemistry’ is also immense live, whilst ‘The Lost Art Of Keeping A Secret’ keeps the same menace of the album version, and is just that little bit rawer, giving it a rougher edge. The only weird thing, and I’m not sure if this is my promo or not, but the live section is a bit of a cut and shut job. It doesn’t flow like a full live set, there’s silence and gaps between each track, which annoying distances you from it.

I’m not going to debate the relative merits of Deluxe / Remaster / Reissued / Repacked albums. If you don’t own Rated R, now’s a good time to get it. If you do, well, it’s all down to disposable income… This is one of the few albums I could quite easily own more than once.