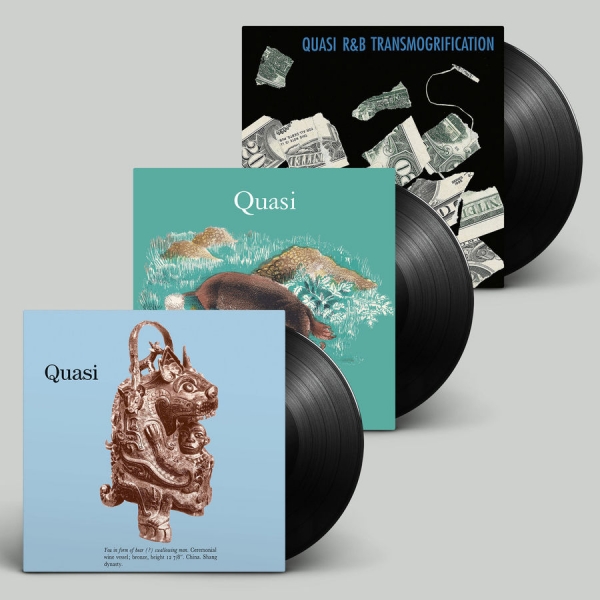 Between its partnership, Quasi was both a furious primary outlet and the best side project in ‘90s indie rock. Domino’s reissue of their crucial three is a gratifying reminder of their unflagging potency.

The friendly Pacific Northwest rivalry between Portland, Oregon, and Seattle, Washington, has played out over generations most visibly in the back-and-forth successes of their professional basketball teams (at least until the Sonics were poached from Seattle in the ‘00s) and their homegrown music scenes. In the mid ‘90s, when the grunge wave that had swept through Seattle and tossed up every scruffy band in its path was drifting back out to sea, leaving the scene scattered and slightly dazed, Portland’s profile began to rise. 1995 was the year The Dandy Warhols released their debut album and Everclear had their first radio hit in the US, but later a real moment arrived in 1997.

Where this particular thread of that story starts can actually be traced just back to the fall of 1996 with the release of Heatmiser’s final and finest album, Mic City Sons. One of the band’s two singer/guitarists, Elliott Smith, had already put out his first two solo albums when Heatmiser broke up, and their relatively new bassist Sam Coomes still had Quasi, a duo with his former spouse Janet Weiss that the two had begun back in 1993 (their musical partnership was founded even before that, with Motorgoat in 1990). The fact that things were starting to take off for Weiss at the time as drummer for Sleater-Kinney didn’t interfere with Quasi’s own acceleration.

1997, then, was a breakthrough year for Portland artists: Elliott Smith’s Either/Or, …The Dandy Warhols Come Down, Pond’s Rock Collection (their major label debut and swan song), Everclear reaching their commercial peak with So Much for the Afterglow, and Quasi’s R&B Transmogrification. Even if the groups were united by geography more than by style, it was hard not to see a rising scene between them. It was a productive time for Portland and other Northwest-based bands. R&B would be the first of three albums in as many years that the band released in the US on Seattle’s Up Records, and which are being re-released here by Domino, who originally put out the following two, Featuring “Birds” and Field Studies, in the UK.

Though technically not their debut (there was a self-released tape in the beginning, and some Early Recordings appeared in 1996, before Touch & Go re-released them in 2001), R&B Transmogrification is the effective entry point for the distinct sound Quasi cultivated across this trio of records. Refined over the preceding years, the key elements are all present: the acerbic vulnerability of Coomes’ lyrics paired with the scuffed and sanguine melodies he delivers them on, Weiss, one the era’s finest drummers, pounding away at their verse-chorus-verse parameters. The opening track, “Ghost Dreaming”, punctuates it all with stabbing Rocksichord, an electronic keyboard from the ‘60s meant to replicate a harpsichord.

This odd sonic centerpiece, garish in most any other pop setting, turned out to be the perfect conveyor for Coomes’ double-edged tales. As R&B’s “Sugar” puts it so finely, albeit in reverse, “One person’s beauty mark / Is another person’s wart.” Quasi’s first albums would not be the same without it, and though they began to move away from the instrument, at least partly out of practical necessity, on Field Studies, it remained an integral part of their sound during that time. Fun fact: when it finally broke down in the early ‘00s, Coomes sold the Rocksichord to the Experience Music Project in Seattle, thus a piece of Quasi’s history became part of music history as well.

Addressing the influence of his and Weiss’ divorce on R&B Transmogrification once in an interview with Hybrid Magazine, Coomes noted that “…it was obvious that we were deep in that situation at the time. It informs that record, certainly a lot more than any other ones.” With its multiple references to ghosts and death, it is easy enough to read it as a break-up album, and hard to imagine the feeling of singing lines like “I used to think you were mine / Mistaken all the time we were together / Now you're gone it's like we never existed / In the first place” (from “In the First Place”) in front of your bandmate who also happens to be who you are singing about. Even if fans were inclined to read such tension into their performances, there was nothing contrived or played up about the nature of their relationship like there would be with, say, the White Stripes; their creative chemistry survived and thrived in the wake of romance, and continues to do so twenty years later.

If R&B’s bi-polar pop feels somewhat apart from what was going on around it, consider “Mama, Papa, Baby”, the Rocksichord scraping out a dirge-y metal riff like a manic cover of a lost Bleach track. Coomes’ low, distorted keyboard sound on R&B and Featuring “Birds” could easily be labeled ‘grunge keyboard’. There’s also the influence of Smith on the quiet guitar-driven closing track “Clouds”. Smith returned the compliment by covering “Clouds” in his live sets. Smith and Coomes both had their own easily identifiable melodic tendencies, but there was bound to be bit of overlap on occasion, as should naturally be expected between friends and tour mates (Coomes and Weiss would back up Elliott Smith live and he would in turn join Quasi on stage to help flesh out some songs).

Arriving little more than a year after R&B, Featuring “Birds” captured what remains the ideal Quasi model for a segment of fans and critics. It seethed and sighed with all of its predecessor’s bitter ebullience and then some. The collision of humor and pathos was encapsulated in “California”, with its natural comedic timing in the pause at the end of the first line: “Life is dull / Life is grey / At its best it’s just okay / But I’m happy to report /…Life is also short”. The controlled chaos of the opening dystopia thrash “Our Happiness Is Guaranteed” embodied their refined looseness.

For all of its unforgiving self-analysis, Featuring “Birds” doesn’t feel aware that it might be something special. From the classic organ swell that introduces “I Never Want To See You Again” to the sweet anhedonia anthem “It’s Hard To Turn Me On” to the promised minute-and-a-half of birds chirping, it definitely was. Featuring “Birds” left no doubt that Quasi were on a roll. In what was surely one of the more generous gestures in indie rock, Up’s original vinyl edition of the album came with a copy of R&B Transmogrification slipped into the sleeve at no extra cost. It was as if the band and the label just wanted to make sure the listener was all caught up before they made their next move.

That move, Field Studies, the final episode of this unplanned trilogy, is of the same body as R&B and “Birds” even as it has its eye locked on the next step. “All the Same” might not quite be their “Tonight, Tonight”, but it is still one heck of a way to drop in strings for the first time. Paired with “The Golden Egg”, the new, sophisticated Quasi had arrived. “The Golden Egg” is the first of a few songs that deal explicitly with the conflict of ‘selling out’, at best a quaint notion by today’s standards but still possibly a relevant concept for people who affiliate with Gen X values. “Shoot yourself in the leg / And the goose lays the golden egg / I had that golden egg before / But it disappeared as I limped out the door”.

“Smile” and “A Fable With No Moral” address the other side of the coin, which turns out to be double-sided. “I went and sold my soul so I could pay my rent / I waited by the mail, but the check was never sent…I didn't give up then, but I made another plan / If Satan didn't want my soul I'd sell it to the man”, goes “A Fable”. On the original edition, it was the centerpiece and “Smile” was the bookend with “The Golden Egg”. On this reissue, “A Fable” and “Smile” (“Common as the cold / Up for sale, never sold / Getting older and it shows / Your disappointment only grows”) are effectively swapped. In either role, the songs are declaratively central to the album’s concerns. Quasi were getting more popular at this point, and with the music industry in its final full flush - CDs selling at chain stores for exorbitant prices, Napster still just the everynerd’s wet dream  it wasn’t unreasonable to imagine a scenario where Quasi would have to make such compromises in pursuit of living comfortably off their art. Jesus, what a time.

Standard narrative arcs can’t be applied to Quasi’s three early golden years. R&B Transmogrification isn’t their A Hard Day’s Night and Field Studies isn’t their Rubber Soul, though it comes close. In hindsight you can hear tones of The Flaming Lips and Death Cab For Cutie in “The Star You Left Behind”, but all three were cresting at the same time, so if one specifically influenced the other it’s probably best left to lost history. Coomes continued to broaden their sound with frayed-jangle lead guitar on “Empty Words” and more straightforward piano tones on “The Golden Egg” and elsewhere. They would continue to reach forward with The Sword of God and Hot Shit!, whether or not fans were ready to keep changing at the same pace.