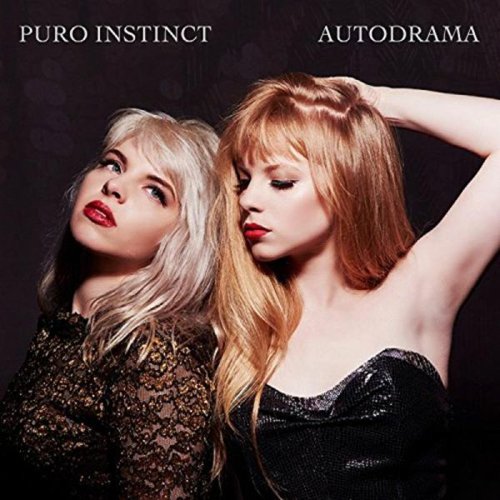 It’s been four years since Puro Instinct’s debut Headbangers In Ecstasy first wafted past our ears.

LA sisters, Piper and Skylar Kaplan, were two, young kindred spirits (Skylar was only 15 at the time) running free in Hollywood and making shoegaze-indebted mermaid rock with their achingly cool musician pal Ariel Pink. But while Skylar's wavery guitar lines and Piper's smudged vocals were inspired by all the right bands – The Smiths, Felt, early REM - Headbangers…lacked real hooks, drifting indistinctly in a pearlesque fog, a pleasant sound, but a forgettable one.

Autodrama addresses all these issues and more. Prelude "Panarchy" begins with a typically dreamy guitar from Skylar, but only moments later it unfurls with a warm burst of lush, blazing shimmer. Next track "Peccavi" simply melts out of the speakers, rich and buttery, Piper’s breathless vocals merging with slinky synths and echoing 80s drums. "Tell Me" is as dreamy as any of the duo’s early work, but the layers of fuzz have been peeled away. Now the melodies glimmer vividly in sunset colours, gold, orange and pink, bolder and sexier than before, Piper’s girlish sighs cutting through like frosted ice, the effect as refreshing as a summer poolside drink.

As with Headbangers In Ecstasy and their previous work under the moniker Pearl Harbor, on Autodrama the Kaplans stick with one sound. But it’s a confident one, strutting RnB that oozes beach house cool. "What You See" and the album’s title track are both highlights, the former all handclaps and sugar kisses. The robotic shimmer of the latter reads like a Californian Purity Ring with a cyborg Kylie on vocals and features a tingling guitar solo from Skylar. “I’m infinite, limitless”, sings Piper in the chorus - and she really sounds like it.

Puro Instinct have left the mists of the past behind and their future looks gloriously bright.