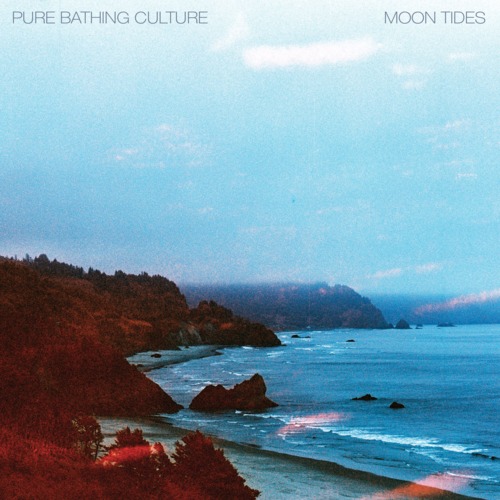 Pure Bathing Culture might only have a self-titled EP and now debut album Moon Tides under their belt, but Sarah Versprille (vocals and keyboards) and Daniel Hindman (guitar) have already built up a fairly extensive CV in the American indie-folk scene as members of Laurel Canyon revivalists Vetiver, and contributors to recent albums by Foxygen and Damien Jurado, under the aegis of multi-instrumentalist and producer-of-choice Richard Swift. Having already produced PBC’s idyllic EP, Swift is back behind the boards for Moon Tides, an elegant set of gleaming guitar lines, lapping synths and woozy West Coast mysticism that gently recalls a forest of influences in the seeding of its sun-dappled world.

As on their EP, Pure Bathing Culture’s focus is firmly on the interplay between Hindman’s echoing guitar and Versprille’s fragile vibrato. Percussion is stripped back to a loose skeleton of crisp, artificial snares and water-drop wood blocks, leaving the pair plenty of space to build their instantly appealing melodic progressions. Opener ‘Pendulum’ paints the picture in colours that recur throughout the record: voice and guitar entwined, dipping and soaring from one tranquil refrain to the next, like a kite snapping serenely on the breeze. Swift was clearly concerned about adding any surplus weight to PBC’s feather-light compositions, and his production eschews bells and whistles in favour of softly accentuating that central guitar-voice relationship, or at least staying out of the way.

As it wafts along, Moon Tides carries with it a range of musical touchstones, past and present. 70s hippie counterculture rears its head occasionally, as on the bucolic imagery of ‘Evergreener’ and the skipping bassline on sunny anthem ‘Seven 2 One’. The album’s woozy aesthetic and isolated lyricism, not to mention the grainy coastline of its cover, takes cues from former chillwavers like Washed Out and Toro Y Moi. But the dominant reference is 80s pop, whether it’s ‘Dream The Dare’ evoking the starry-eyed gaze of the Cocteau Twins at their height, or princess-in-a-tower ballad ‘Golden Girl’ floating in the midpoint between the gloss of Fleetwood Mac circa Tango In The Night and the icy self-reflection of Suzanne Vega. The duo don’t shy away from the decade’s more kitschy excesses either, as demonstrated by the prominent sampling of Benny Mardones’s 1980 fromage-fest ‘Into The Night’ on the R&B-inflected ‘Scotty’.

There’s a sense of poise throughout; every edge is padded, every lick and synth wash presented without a single hair out of place. This detached approach lends the album cohesion and a statuesque grace, but like PBC’s close counterparts Beach House, it struggles to forge a deeper connection or surprise the listener with sudden shifts in tone. Moon Tides is a daydream, not a rollercoaster ride, and if you’re not enchanted with the album from its earliest moments you’re unlikely to find anything that will catch your attention down the line. Surrender to its lovely embrace, though, and you’ll find a late-summer gem that makes a perfect accompaniment to falling leaves and the last rays of September sun.