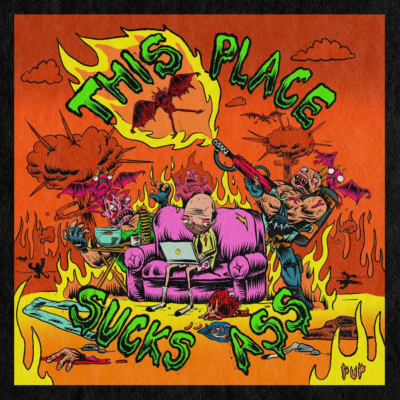 It’s been a year and a half since Canadian pop-punkers PUP released their most recent album Morbid Stuff. A lot has changed in that time, and while that record fantasised about the world exploding, little did PUP know that 12 short months later the world would actually be hell bent on imploding.

So how does a pop-punk band from Toronto cope with a global pandemic? They release This Place Sucks Ass, an EP that’s as untamed and as unpredictable as the year we’ve had. And while three of these songs might well have been taken from their Morbid Stuff sessions, the sheer energy and anarchy that left them on the cutting room floor lend themselves to this EP perfectly.

While that album was still a somewhat anarchic affair, its backbone was a brand of pop-punk not dissimilar to that of bands such as The Front Bottoms. This Place... however, feels weightier, more angsty and claustrophobic – a fitting response to a worldwide lockdown.

Opening with previous single "Rot", PUP waste no time in establishing the record’s aesthetic certainly, but also their frustrations. A combination of pop-punk and post-hardcore, there’s elements of bands such as Gnarwolves at play, but also echoes of Listener across the track’s verses. "Anaphylactic" is arguably the strongest track on offer and would nestle in effortlessly besides anything on Morbid Stuff as a result of its ability to strike a deft balance between melody and anarchy.

Elsewhere a cover of Grandaddy’s "AM 180" is a welcome inclusion that manages to stay true to the original whilst feeling like it could genuinely have been written for this record, whilst closer ‘Edmonton’ delivers a short sharp shock that’s as much a gut punch as it is the record’s conclusion.

Less accessible than its full length predecessor, but no less entertaining, This Place Sucks Ass is both uplifting and cathartic, reminding us that however shit things might get, we are all going through this together, and even though this place might well suck ass, one things for certain in that PUP absolutely do not.