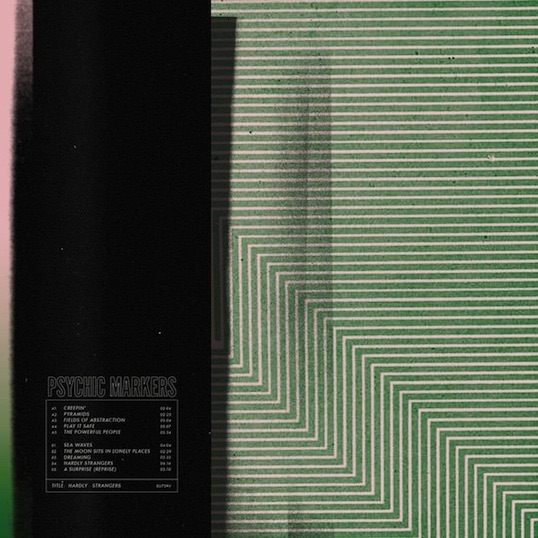 Psychic Markers are a quintet of musical nomads who have their sights set on everywhere and nowhere in particular, directing their focus more to the functions of navigation.

The crew - Alannah Ashworth, Lewis Baker, Steven Dove, Leon Dufficy and Luke Jarvis - all come to Psychic Markers from other bands, which sets the group up as a point of creative confluence rather than a centered force. Hardly Strangers never takes its fingers off the dial as it scans through each station, but the result isn’t a lack of focus, far from it. As the title suggests, theirs is a comfortable chemistry where it seems there must be no wrong ideas, they're just waiting for the right moment to come together.

“Release the anchor / Sail away / The pyramids are here to stay” intones Dove over and over at the end of “Pyramids”, which starts like a dusted “Chariots of Fire” and comes to a squiggling, pulsing finish in just over two minutes. The immovable authority of rock's past is set in stone, so why not venture forth and see what else is out there. Across “Sea Waves” and “Fields of Abstraction” they head, but for all the bright corners and modern psychedelic melange that Psychic Markers see fit to explore, they’re also a jam band that knows how to keep things succinct.

“One day this ship’s gonna sink”, though, Dove later warns on “Dreaming”. “I’m sick of dreaming / About living the dream”, he relates, softened by Ashworth’s distant shooby-doo-wops, adding more cryptically that “I might just give up / And try something with feeling”. The discouraged moment passes like the rest, and, in defiance of terrestrial limitations, Psychic Markers make it home without ever really circling back on themselves.