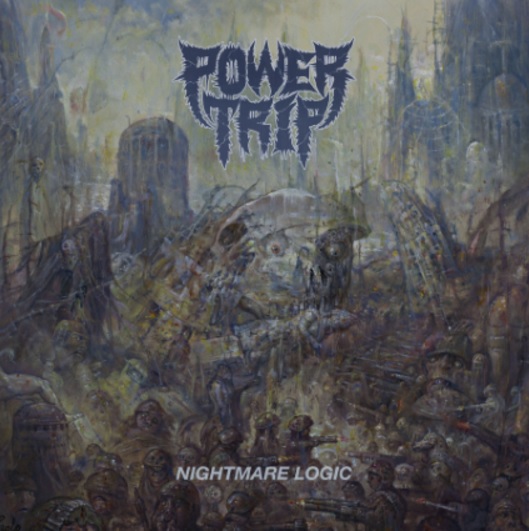 “It’s my belief that your reality is too fucking weak,” snarled Riley Gale on Power Trip’s debut album, Manifest Decimation. The obvious context was religion but, given the menacing racket Power Trip make, he could just as easily have been addressing any authority figure.

Religion was the main lyrical focus of Decimation, and the crossover thrashers’ follow up, Nightmare Logic, finds Gale continuing his contemptuous views on it and its leaders. Of course, a metal band disparaging religion is nothing new; paradoxically enough, it’s preaching to the choir. That said, Gale’s seething hatred for organised religion makes his blunt-force lyricism stand out: Album closer “Crucifixation,” for example, contains gems like, “I don’t care what you think you know / Go and leave it on your tombstone.”

Yet, sharp, scornful lyricism towards such a hackneyed topic wouldn’t mean much if the music didn't match its intensity. Thankfully, Power Trip’s galloping thrash and whammy-bar solos from their debut are intact here, seemingly as a result of the band taking the “if it ain’t broke” approach to its sophomore effort. Logic is an overall catchier affair than Decimation, with the band taking the best ideas from the latter (“Murderer’s Row” and “Crossbreaker”) and using them as building blocks for these eight songs.

In addition to the improved songwriting, the production has been upgraded. Returning as producer and engineer, Arthur Rizk wisely dials back the reverb from Decimation, resulting in a clearer record that allows breakneck riff-fests like “Firing Squad” and “Ruination” to be enjoyed without a muddy background.

Despite taking almost four years to arrive, Nightmare Logic couldn’t have come at a better time. 2017 is likely to produce some of the angriest music since Vietnam, and Power Trip are the perfect act to lead an army head-long into battle. Or as Gale puts it: “Lined up with the firing squad / Now take your best shot!”