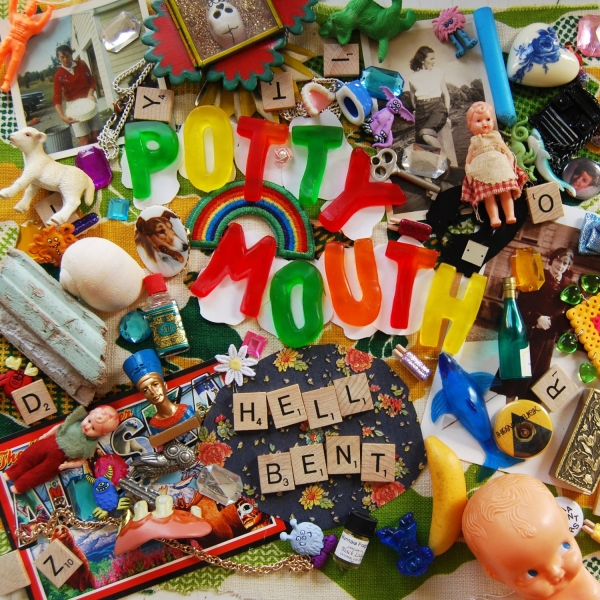 When Potty Mouth’s superlative Sun Damage mini-LP dropped last year, it was instantly noticeable that the band had built their punk-fuelled pop on the foundations that riot grrrl laid down two decades earlier. The purposeful directness of Bikini Kill, Sleater-Kinney’s way with an angular chord structure… hey, they even took their name from a Bratmobile album.

This follow-up full-length feels like more of the same but somehow even better, thanks to a healthy shot in the arm from dreamy melodicists like Velocity Girl or Tiger Trap – bittersweet melancholy to underpin their three-minute bursts of furious splendour. Slightly more refined it might be, but it suits the fuck outta Hell Bent.

If these songs feel less stridently political than anything penned by Kathleen Hanna or Allison Wolfe, it’s because they’re too busy addressing personal issues and experience. As with the old Hüsker Dü adage that revolution starts in the bathroom mirror, they feed us power-chord diary extracts; dismissing feeble advice about ignoring their ambitions (‘The Gap’) with the same impassioned fervour as they manage to inject into a song about embracing subcultures as a means of self-empowerment (‘Black And Studs’). Abby Weems’ voice sounds simultaneously raging and utterly dispassionate, whilst Phoebe Harris’ spiky guitars feel both gnarly and tuneful – a myriad of contradictions and mysteries wrapping up a bundle of pop aceness.

Prefer your punk a little more in-yer-face? Try the album’s penultimate track ‘Shithead’, which manages to be snottier, angrier and – you betcha – funnier than anything by the hardcore heroes of today – yer OFF!s, yer Trash Talks, yer Cerebral Ballzys. There’s also the self-aggrandising bossness of ‘The Better End’, which goes from skipping rhyme insults to slanted, Superchunk-esque grandeur over the course of five exhilarating minutes. It’s not quite pop-punk, it’s not quite indie rock… but it is fucking brilliant, and it fits neatly alongside ostensible peers such as Bam!Bam!, or (on this side of the pond) the likes of Skinny Girl Diet and My Therapist Says Hot Damn. And, lest we forget, Ms Hanna herself recently returned with The Julie Ruin…

Whether Potty Mouth are achieving anything new is besides the point – the important thing is that they feel fresh and relevant, whereas the punk of today has seemingly had its time, growing increasingly redundant and stale. Musically. Politically. Generally. Let’s hope Hell Bent genuinely does signal a revival of interest – after all, alternatives like the revival of lad culture frankly do the whole human race a great disservice. We can do better. We should do better. Let Potty Mouth point us in the right direction.