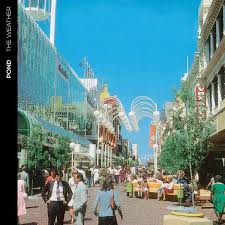 Try as you might, it’s impossible to talk about Pond without making reference to Tame Impala. These two groups may officially be separate entities but, in truth, they’re more like some kind of kooky, spaced-out extended family, sharing and swapping band members and ideas as freely and smoothly as the cosmic grooves that have taken their lucid brand of Perthian psychedelia to the world stage.

With this in mind, and with Kevin Parker once again drafted in as Pond producer, The Weather - the seventh LP in what has been a somewhat prolific recording career - bears more than a trace of the alluring psych-disco merry-go-round that Tame Impala appeared to perfect on 2015’s Currents. "Paint Me Silver", which glows and glimmers with all the frantic hubbub of an all-night video game arcade, is the most on-the-nose example of this considerable similarity. Nick Allbrook’s serene voice rises and falls over a smooth bassline in the sweetest of ways, sounding like the Bee Gees sharing helium (and perhaps some other choice substances) with Prince at Studio 54. Only nailed-on future anthem "Sweep Me Off My Feet", comprised of swirling synths, cascading guitars and an absolute firecracker of a chorus, can ever really match it for lushness and inspiration. Close though is the album’s scintillating title track, which closes proceedings on an acid-flavoured high note, with Allbrook’s voice buried deep below streaming walls of guitar and synth that light up like the skies on a certain memorable November day. This dancefloor direction may not be entirely original, but it’s a path that Allbrook and co. shake their hips on exceedingly well. There’s definitely something funky being passed around in Perth.

Elsewhere, the band emerge from the shadow of Parker’s general and production influence whilst further solidifying their place in the quirky annals of experimental pop history. The gentle "Zen Automaton" is a glam pastiche that moves through the ages in just over four minutes, its starry-eyed vocal recalling The Flaming Lips’ zany sci-fi vignettes, its hypnotising multi-instrumental cacophony gleaned from the sparkling textbooks of Bowie and Roxy Music. The mesmerising, otherworldly "Edge Of The World Pt. 2" proves pure prog wizardry as the band fire on all cylinders to ignite an elegiac ending lament that could have easily book-ended The Dark Side Of The Moon. These ambitious prog leanings are further brought to bear on "Edge Of The World Pt.1" which shifts tone as quickly as a Conservative PM quizzed on a potential election, morphing from gothic ,organ-led melancholy to bracing rhapsody quicker than you can say wish you were here.

There’s even space to show affinity to those contemporaries who are also finding ways of bending pop to their whims, with slow-building opener "30000 Megatons", shrewdly released upon Donald Trump’s ascension to power, taking a Father John Misty-like look at the pure comedy of it all. Over a throbbing, robotised pulse, Allbrook, attitude to destruction reminiscent of those featured in Stanley Kubrick’s Dr Strangelove, sits down and welcomes armageddon with open arms, eagerly pleading with the powers that be to "push the button now". It’s a slice of black humour that, with the album’s constant skirting between genres, occasionally over-indulgent prog odysseys and small lapses in quality control ("All I Want For Xmas" and "A/B" are half-baked throwaway tracks that have miraculously made it past notorious perfectionist Parker), gives a real glimpse into where Pond are at at this moment in time, a band at a crossroads between independence and influence, and equally in thrall to the twin eccentricities of pop and psych. Just what they’ll do next is anyone’s guess, but we’ll all be sitting here waiting with open ears and baited breath. Rarely have they sounded so good.