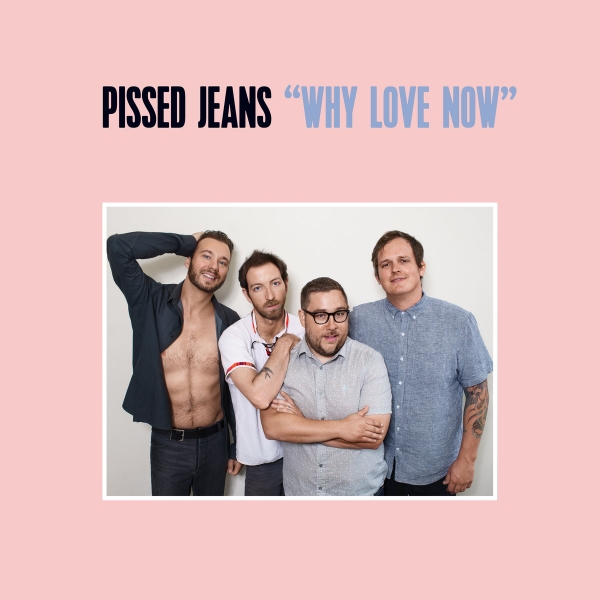 “I’ve been described as good, some have even said great,” Matt Korvette growls on Pissed Jeans’ latest album. “What have I done to deserve such a fate?” Raging at full throttle, the Pennsylvania outfit wrench the demons of twenty-first century life out from where they hide and leave them battered and broken in the spotlight.

Like a fist fight in a prison yard, Pissed Jeans' music has always had a savage brutality and darkness to it. In this respect Why Love Now is no different. With riffs weighted so they're heavy enough to bludgeon, and vocals that feel like they're being torn straight from the larynx, the album is a tour de force of high octane refrains and filth-driven focus.

Clawing and scraping their way from the darkest corners of human consciousness, recounted with a tongue placed firmly in cheek, these songs tear through the facade and dig up how rotten life can be. Giving voice to plagues and demons, Pissed Jeans grate and scrape their way through the chaos to a freewheeling form of release.

Stripping raw attraction down to its most impulsive and volatile, album centrepiece "I'm A Man" is the band at their most immediate. Fuelled ever onwards by tribal rhythms, author Lindsay Hunter's monologue slithers its way through the speakers, words reaching out to grab at you with dirty hands that just can't wait to get dirtier.

The theme of gender politics is one that resounds clearly through Pissed Jeans' latest album. From the fetish-twisting of "Ignorecam" to the ridicule of body shaming on "It's Your Knees", these songs make a presentation of life at its seediest to instil a disgust that frankly should've been there all along.

Uncomfortable in places? There's no doubt. An assault on the senses? Definitely. If Why Love Now were a person, you'd cross the road for fear of passing them in the street. Presenting the sleazy and savage side of life with such momentum, Pissed Jeans lay waste to rationalisation and set standards straight.