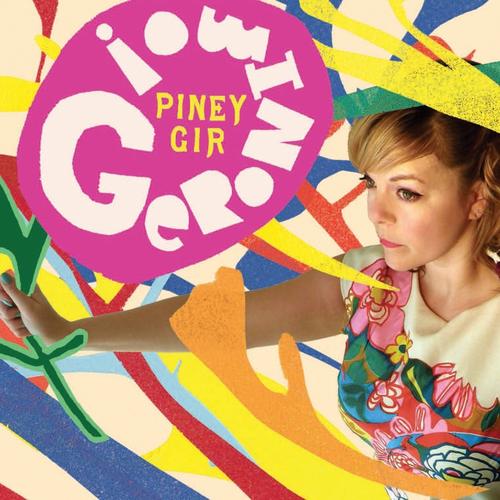 The circuitous musical route that has led Angela Penhaligon to record Geronimo!, her playful fifth album under the Piney Gir moniker, is quite evident in the strikingly simple songs that sound equally influenced by California surfer-girl pop as well as her countrified, melodic Midwestern roots. And when you give those familiar Americana elements featured on her new material a distinctively modern Carnaby Street twist, you have a mellifluous road-map of exactly where Penhaligon has come from to get to this point, and what direction she may take her sound in the future.

While Penhaligon has experimented with many disparate sounds throughout her career (on her way to London via Kansas and all areas in between), it seems that with Geronimo!, she has finally hit on the right balance of heartfelt, vulnerable country and catchy, buoyant pop, all of which adds up to a lively, natural sounding album that is sure to please fans of both genres and most of those on the fringes as well.

The record bursts into life with the blissful pulse of ‘Outta Sight,’ an optimistic singalong that features a bouncy, Beach Boys-like melody as well as Penhaligon’s buoyant vocals atop her gritty guitar. The garage/surf-rock riffs of ‘Here’s Looking At You,’ continues the raucous start, which might come as a bit of a shock for those fans who were hoping a continuation of Piney Gir’s more tranquil, countrified sound. But those fans will be gratified by ‘Oh Lies,’ a more familiar return to that timeless Americana that garnered Piney Gir a following in the first place, just blended with the elegance and style of a self-assured ’50s girl-group.

Throughout the album it’s Penhaligon’s sprightly guitar work that repeatedly catches your ear, as her simple but spirited riffs give these sunny songs a rough edge and an indelible quality that makes them highly listenable and quite enjoyable. ‘Would You Be There’ has an early R.E.M. sound mixed with the enduring, distinctive quality of the Byrds, all augmented by Penhaligon’s golden vocals. And while these songs have an immediate familiarity to them, hinting at a broad cross-section of genres and recognizable radio hits from decades past, there is a modern vitality and earnest originality to them that keeps them from ever being overtly pastiche.

While the more upbeat, boisterous numbers work best on the album, the softer, more reflective tracks have an effortless charm to them. ‘The Gift’ features a subtle yodel (if a yodel can ever be subtle) over a breezy, country-waltz tempo, while ‘Stay Sweet’ is a candid, stirring look at why relationships don’t work but how they still manage to leave their mark on your heart anyway. The somber, horn-laden album closer ‘Say Goodbye’ ends the record rather poignantly, while also giving a subtle nod to the enduring influence of the Beatles.

Even though the record’s uneven second half doesn’t quite keep up the inventive energy found at the start, the fact that the band is clearly enjoying themselves (as evidenced by the appropriately titled ‘Let’s Get Silly’) imbues the closing songs with an unrestrained, animated spirit that is quite engaging. And while the continual change in tone and musical styles from one song to the next gives the album a divergent, somewhat schizophrenic quality, the straightforward, sincere approach and distinct flair that Penhaligon and her band bring to these diverse tracks are what makes Geronimo! so endearing and ultimately successful.