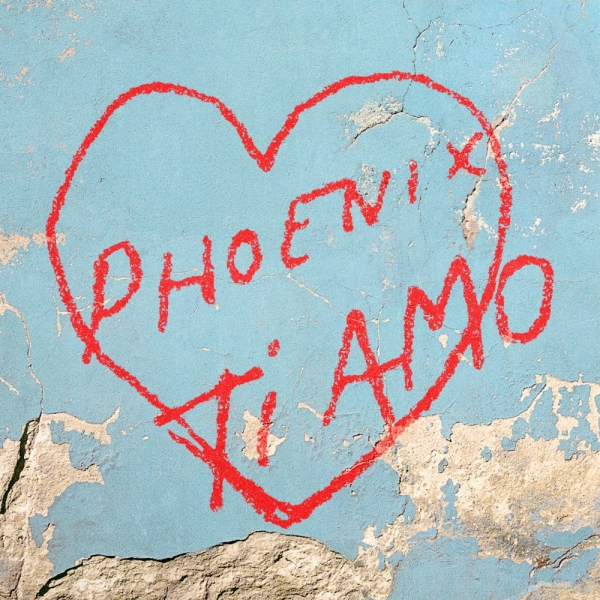 Phoenix’s latest is a deceptively light album that offers pristine, tightly-wound indie synth-pop that touches upon these troubled times in a way that feels like a genuine commentary as opposed to willfully ignorant escapism.

The French quartet have always been able to craft pristine tunes with nary a hair out of place, but the tracks on Ti Amo feel both more meticulous and airier. Deck d’Arcy’s bass lines are tethered to the infectious, punchy percussion, and synths as opposed to guitars dominate the soundscape. While they explored maximalism at times on Bankrupt!, this is a leaner record that harkens back to some of the band’s great understated moments on Wolfgang Amadeus Phoenix and It’s Never Been Like That, although Ti Amo is far less of a cuffed-jeans-and-white-Chucks indie rock record than either of those. Their influences here feel more geographically diverse than ever before (hence the Italian title), but their dynamic is so well established that the tracks never feel bloated or overstuffed.

Lead single “J-Boy” is a pointillist patchwork of synths, punctuated by flanging, rhythmic vocals from Thomas Mars that sound almost disembodied. The song starts off sweet enough, with Mars stealing from a store to impress a woman, and joking that she talked the owner out of “hanging [him] higher than a disco ball”, but the lyrics grow progressively darker. “Some things they don't matter till they matter to you / They stole that money from a homeless girl / The truth is we're all to blame / There are lies and moral consequences”, Mars sings at the beginning of the third verse, and it’s hard to believe it’s the same song that started with Mars dramatizing petty theft.

The album’s title track is sweet and forthright, but the quartet of different languages used on the chorus (“Love you! Ti amo! Je t’aime! Te quiero!”) implies a kind of desperation, a universal yearning for love, and the band said of the record, “’Ti Amo’ is a romantic song about the tragedy of unreciprocated love and desire”.

Nu-disco has always been on the periphery of Phoenix’s sound (not to mention the inspiration for some of their best remixes), and the band is clearly enjoying their moment to fully embrace its aesthetic on songs like “Tuttifrutti”. Laurent Brancowitz referenced “Italian discos” as an influence for the album’s sound in an interview with the New York Times, and this track is perhaps the purest example of that influence.

“Role Model” is a gargantuan piece of synth-pop that feels like a full-length expansion of the glitzy hook from Bankrupt!’s single “Entertainment”. But when Mars asks “Don’t you feel like a witness?” it creates an instantaneous sense of intimacy among the lapping waves of synths.

The album’s closer, “Telefono”, is perhaps the most prototypically Phoenix song on Ti Amo, with chugging guitars and earnest vocals from Mars, who confesses, “Yeah I’m just calling to say / No I cannot sleep when you’re wide awake”, an understated yet powerful line about the impact of human connection that feels like it could both be about the well-documented struggles of a long-distance relationship and also the connection we feel to those suffering in distant countries.

At just 10 tracks, the album feels like a daydream ending prematurely. It’s escapism, in part because Phoenix are so good at crafting incandescent, colorful tunes, but the four members have seen too much and are too self-aware to make an album that doesn’t engage with the harsh realities of modern life, particularly in Paris. There’s something to be said for shutting off your brain and letting the globally-inspired groove of Ti Amo transport you, but the album works best when you bear in mind the turbulent times that inspired it. Ti Amo has a romantic heart, and Phoenix use it to find the bright spots in a tragic world, without losing sight of the tragedy itself.