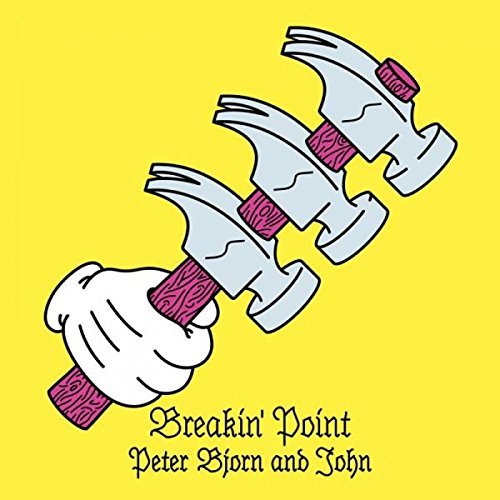 There's something sweetly ironic about the fact that the biggest hit of Peter, Bjorn and John’s career - the ubiquitous “Young Folks” - came from an album called Writers Block. Given that it was such a brilliantly infectious and singular pop tune, one always wondered whether they'd ever write anything as good again. In truth, although it'd be wrong to think the band haven't released anything of merit since 2007, nothing has quite reach the same giddy levels of pop genius.

If there's a direction on Breakin' Point, it's one of synth pop fun. Post Writers Block, the trio's releases have been varied to say the least; Seaside Rock was largely instrumental, while Living Thing took a darker and more experimental turn. This feels like a more natural return to their signature laid back melodies and easy on the ear songwriting.

Breakin' Point opens with a blast of vocoder-heavy disco fun, with “Dominos” fusing Bee Gees falsetto and funky Chic-like riffs to set the standard for the album. On “What You Talking About” they channel Foster the People’s “Pumped Up Kicks”, aiming for a festival anthem, while on “Hard Sleep” they manage to recreate the whole of Cut Copy’s In Ghost Colours in three minutes.

Yet there are so many different genres, instruments, sounds and ideas at play here that at times its too much to digest. Breakin' Point is a curious album that recreates perfectly the era of the glory days for bands like Cut Copy, Friendly Fires, Foster the People (the indie/synthpop heyday of 2007 - 2011), but whether that's a soun that really needed to be resurrected is open to debate.