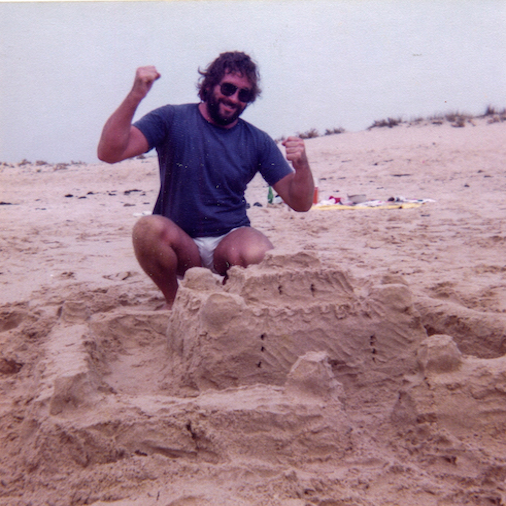 ​On the cover of their debut album, Until The Tide Creeps In, the father of Penelope Isles’ songwriting sibling duo Jack and Lily Wolter is seen sitting proudly next to his masterful sandcastle on a beach, clenched fists pumping the air with joking machismo. The photograph was taken the day he met Jack and Lily’s mother.

It's a fitting image for the Brighton band's full-length release, which builds the band's base solidly on ten beautifully familiar and welcoming songs that centre around the dynamics of family and drift comfortably into imagery of water and the sea.

Growing up on the Isle of Man, Jack & Lily lost touch as many pairs of siblings inevitably do when the older, Jack, moved to university. Reconnecting as adults years later in Brighton, where Lily had moved to to study songwriting, Jack began playing with his sister and her bandmates Becky Redford and Jack Sowton, fusing their distinct songwriting styles as Penelope Isles. Bright-eyed and dreamy, the band chanel the melody-centric styles of golden-era indie greats such as Grizzly Bear, The Thrills, Deerhunter in a pleasingly fresh, unpretentious and non-derivative way.

Their debut, proudly released on Bella Union, showcases this charm succinctly, and is hard not to get hooked on from the start. There’s a gorgeous pacing to the record, with lead single and set opener “Chlorine” kicking it off appropriately with grizzly strumming and a linear progression to its psych-pop climax, before leading into the curious and swaying “Round” and falling into the twilight dream of the Bradford Cox/Thom Yorke-esque “Not Talking”. It’s a stirring, kaleidescoping and familiar feeling that’s revisited shortly after in “Three”, and both highlight the band’s skill in building textures and dynamics tastefully.

The record's own main virtue however, is the split in perspectives from brother and sister and the moments they intertwine. On "Underwater Record Store", which Lily dominates with chorusy-falsetto, the youngest recalls when after building her own sandcastle that fell down, her father "Took me to a real castle to see that nobody's got me down"; in the long and driving "Gnarbone", Jack reflects on another's life: "You never learnt to crawl / You didn't have to". He contiunes with a looseness that makes it hard to pin down who the person is, but starting at birth, it's hard not to imagine brother and sister looking over a family album together, whosever it is.

Though it needn't define them, with Until The Tide Creeps In Penelope Isles have built a strong foundation on familial dynamics and the criss-crossing of sibling perspectives with elegant and catchy songwriting, springboarding them in to the many sets of arms ready to welcome them.