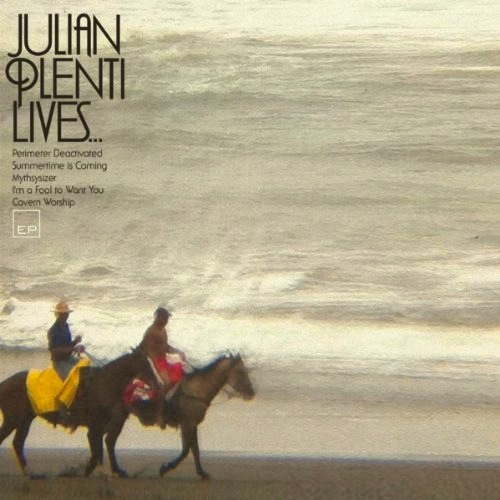 It’s hard to figure out just what Paul Banks’ aim is with his Julian Plenti side project. On one hand, Julian Plenti Is… Skyscraper is noticeably better than either of the last two Interpol records. But on his brief, inscrutable new EP, Julian Plenti Lives…, Banks throws some true sonic curveballs towards fans trying to figure out what the current state of affairs is with his main band, while also gleaning clues as to the direction their sound might take in the future, or if Banks has plans to chuck it all and just go solo.

While not an uninteresting listen in the least, more questions will be raised by this EP than it answers, leaving Interpol fans in the lurch until Banks comes out with his promised full-length this autumn. For now, he’s given us a catch-all collection featuring two new original songs (one of them a pulsing instrumental), a reworking of both Harold Faltermeyer’s theme to the 1997 Arnold Schwarzenegger flick, The Running Man, and a rather cursory, but still classic, J Dilla banger, along with an impassioned Frank Sinatra cover. And yes, it is as weird and eclectic as it sounds.

The two prominent songs included in the collection are both quite good, with the Banks original ‘Summertime Is Coming’ building gradually from a leisurely warm weather anthem to a soaring, emphatic chorus that bodes well for his forthcoming album. While covering Sinatra’s ‘Fool To Want You’ at first seems like a bizarre, and potentially unwise, choice, Banks eventually makes the song his own, injecting his modern, moody twist on Ol’ Blue Eyes’ tender classic over a soulful, string-laden arrangement. Surprisingly, it works, even though it really has no business doing so.

The other three numbers are all instrumentals, and here is where things truly get odd. The urgent, superhero pulse of ‘Perimeter Deactivated’ features an adventure movie guitar riff that does a good job of boldly announcing the arrival of a new EP from Paul Banks and… nothing more, really. And while the J Dilla cover finds Banks breaking new ground musically, and stretching out his sonic parameters a bit, the fleeting song clocks in under two minutes, so its inventiveness hardly has time to ring true before its over.

The closing track is the EP’s second Banks original, ‘Cavern Worship’, and while the track certainly strays from the gloomy template he has stuck to with his Interpol brethren, it doesn’t offer up anything all that memorable or startling, and winds down the collection with a bit of a thud. At least Banks is remaining productive during his main band’s prolonged down time, and figuring out what sounds and styles fit his current moods the best. He just needs to be a bit more selective and discerning when it comes to the songs that make the cut for his (or Interpol’s) next full-length.