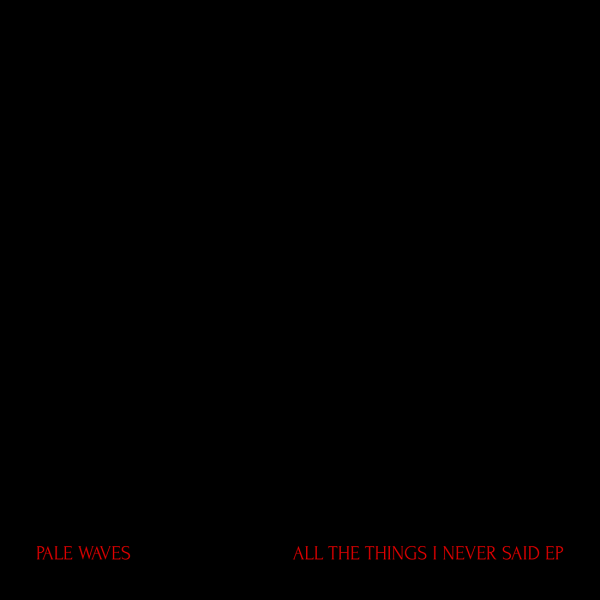 If 2017 proved to be a whirlwind year for Manchester’s Pale Waves, 2018 is likely to be something else entirely. As if earning fifth place in the BBC’s Sound of 2018 wasn’t enough, this month also sees the four-piece release All the Things I Never Said, their Matt Healy-produced debut EP.

A precursor to the band’s debut LP that’s due to drop later this year, All the Things I Never Said is four tracks of effortless indie-pop; its silky-smooth pop licks and sugar sweet vocal delivery masking a darkness that seems inherent to Pale Waves’ genetic make-up.

Opening with current single "New Year’s Eve" the band’s brand of glitzy goth pop is established from the outset. An infectious chorus belys an angsty sense of self-deprecation that permeates the track, establishing a dichotomy of pop pomp and twenty-something cynicism that works in Pale Waves’ favour, and continuing throughout the course of All the Things I Never Said.

Any such cynicism is left to fall by the wayside however, at least as far as following track "The Tide" is concerned. Possibly familiar to those who’ve been following the band for a while, its pimped-up production does nothing to hamper its hugely uplifting nature.

Elsewhere, closing number "Heavenly" might be familiar as well, that too undergoing a sonic makeover that serves to enhance the track’s expansive and texturous composition. It’s forthcoming single "My Obsession" that’s the most intriguing track included however. Slower than everything else on offer, you can’t help but feel that this is the direction the band’s forthcoming album will take. Darker in tone than its counterparts, and harbouring a sense of maturity that shows Pale Waves have more than just an ear for a melody.

Though the sugary delivery of much of All the Things I Never Said might leave some with a toothache, it’s impossible to deny how much fun their music is. More than just another synth-pop outfit however, the undercurrent of darkness that bubbles underneath the frothy, poppy façade separates them from their contemporaries and proving that Pale Waves are The Cure for the Instagram generation, and they’re not going anywhere any time soon.