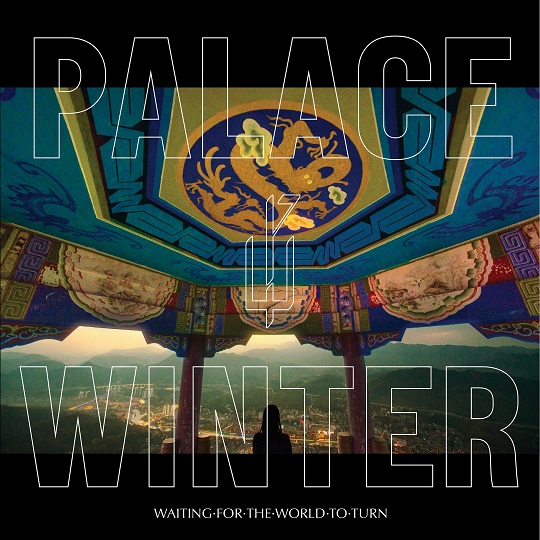 The word ‘epic’ is often overused in the context of music, but listening to Palace Winter’s debut album it’s the only one that will do.

Their songs are built around Caspar Hesselager’s cacophonous synths and Carl Coleman’s beautifully jangled guitars and reverb drenched voice. When I first heard the opening minutes of their song “Positron” I thought I was hearing an unreleased, early R.E.M. tune, such is the Peter Buckian jangle of the guitar. Yet in its closing minutes it mutates into a more spaced-out place, where they slow the tempo right down and move into a space that brings us back to the word epic quite brilliantly.

It’s a motif they pull off frequently over the course of the record without sounding remotely contrived; such transformations suit the songs’ wanderlust in sound to a tee. The songs of Waiting for the World to Turn show that “Positron” is neither a fluke nor that they’re a one trick pony. The music is layered and expansive and the opening “Dune Wind”, with its revolving piano and faded in drums sets the scene beautifully. The ornate arrangement takes its own time and the singing doesn’t arrive until well after the two minute mark.

Throughout the record, the music is so intricate it brings a film soundtrack to mind and when they talked us through the album it was no surprise they compared it to the films of P.T Anderson, saying the There Will Be Blood director “defines what we want to achieve with our music; widescreen epics where every frame looks like a photo.” A song such as “Time Machine” more than lives up to the comparison, with each element of the arrangement sounding like it’s deliberately positioned. The melodies are so intricate that even on the tenth listen you notice pieces you hadn’t spotted before.

The closing songs, the interrelated “Dependence” and “Independence” sum up their aesthetic. The former is a sparse atmospheric piece built around the line “My dependence on you frightens me”, which evolves in latter’s more immersive and textured mood, where they return to the widescreen panorama of the opening “Dune Wind.”

The challenge facing Palace Winter is getting big enough to play venues that will fit the breadth of their songs. It’s a record full of big ideas lyrically - disorientation, sleeplessness and time travel - which are matched by music that underpin the songs’ restlessness and sonic ambition.

With songs as good and as vast in sound as these, surely the enormodromes are their next step.