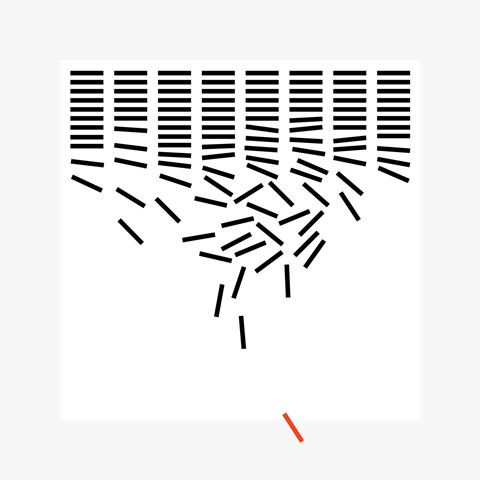 I went to see Tim Hecker play live a couple of weeks ago, and in doing so had my outlook on experimental, ambient music altered irreversibly. He produced a nightmarish, hour-long maelstrom of noise in pitch darkness, and it was a set that, as well as having given me serious reason to think about sleeping with the light on, also had me wondering how some of his gentler peers can come anywhere close to that level of unbridled intensity.

That, in turn, piqued my interest in this new EP from Oneohtrix Point Never – or Daniel Lopatin, when he’s at home in Brooklyn – because on last year’s R Plus Seven, he managed to cultivate a sound that seemed at once both gentle and fierce; it was as if he’d brought the basic form of Hecker’s own elixir away from their work on the International Tourist record, and laced it with an industrial helping of Valium.

The material here isn’t actually entirely new, but you could be forgiven for jumping to that conclusion, taking into account Lopatin’s impressive work ethic and his fondness for non-sequiturs. The title Commissions is anything but; all three of these tracks were individually assigned to Lopatin by external bodies, and a little bit of contextual information is vital to fully appreciating each one.

“Music for Steamed Rocks” is Lopatin’s own take on the work of Polish composer Witold Lutoslawski, specifically Preludes; he unveiled it at last year’s Sacrum Profanum festival, to mark the composer’s centenary. It’s an eccentric spin on a typically hymnal sound; looped, wordless female vocals, intermittent bursts of organ, and a gradually-introduced string section all seem like standard fare, but the climax is driven by decidedly contemporary fizzing synths, that don’t feel at all out of place.

“Meet Your Creator”, meanwhile, was commissioned for a Saatchi & Saatchi showcase – rock and roll ain’t dead, eh? – and enters considerably more diffuse territory; an spiraling electronic intro that sounds as if it was plucked from a 16-bit video game quickly gives way to positively subterranean bass. The track’s first half is characterised by the lack of any discernible time signature, whereas the second channels “Music for Steamed Rocks”’ steadily-building ambience; the showcase that it was written for involved floating robots ‘dancing’ around a pyramid, and “Meet Your Creator” does a good job of reflecting their erratic, unpredictable movements.

There’s another left turn on “I Only Have Eyes for You”; it’s ostensibly a cover of the thirties pop classic, but predictably bears only the most scant of resemblances. It’s the most challenging piece on the EP, with an unrelentingly choppy vocal sample wrapped in a blanket of dark, ominous synth. Superficially, it feels as if it should be soothing, but there’s an implied foreboding to the instrumentation and something unshakeably disconcerting about the irregular, layered vocal that seems intended to throw you off. The track was one of a host of different takes on the 1934 original ordered by Doug Aitken for his Song 1 exhibit in Washington; with other contributors including James Murphy and Beck, it’s probably safe to assume that Lopatin’s version was comfortably the most esoteric.

It’s a testament to the distinctiveness of Lopatin’s sound that these three markedly different tracks – which were never intended to sit by side on the same release – work together in impressively cohesive fashion. It’s also a rare Record Store Day release that isn’t a scandalously overpriced reissue, or a single that would’ve been pressed to vinyl anyway; it’s not Lopatin’s finest work, but certainly whets the appetite for his next full-length project – if he stays true to previous form, we shouldn’t have too long to wait for it.