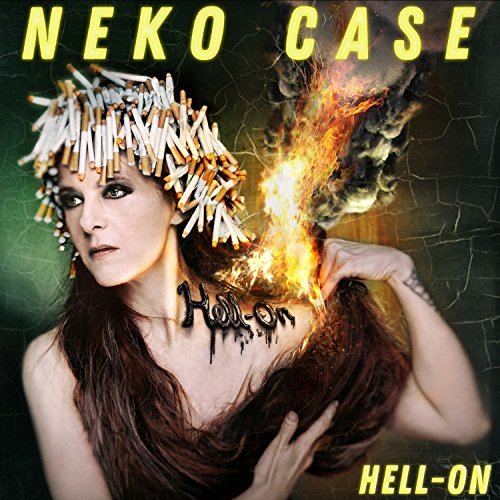 Neko Case’s eighth solo album, Hell-On, is her most conceptually diverse to date. The Lynchian atmospherics are at an all-time high, as is her creative ambition. Following a tragic house fire and some deeply disturbing personal legal dramas, Case’s first self-produced album is one of her finest.

Much like her creative peers, Neko Case's music has always encompassed elements of moody, dark, and perturbed folk, aberrantly blended with an Americana twang and a bit of an outlaw attitude. On her eighth studio album — and first self-produced — it comes as a surprise when Case's typical tropes of heartbroken Spaghetti Western love songs have grown to grander arrangements, more focused on audial stimulation than crafting any sort of mood. The kicker? Hell-On is one of Case's moodiest solo records to date.

Case's songs have always evolved, unwinding and contorting themselves, gutting themselves until they're half dead and bleeding. Never before have they been as wild and human as those on Hell-On. Arrangements and found sounds unfold around Case's breathtaking and achingly painful voice, while it remains still, undisturbed, and utterly resonant. Take "Halls of Sarah" for example — what begins as a simple acoustic guitar twang transfigures into a triumphant blast of grace and soaring backing vocals.

On "Curse of the I-5 Corridor", Case's songwriting is painstakingly evocative, spelling "I miss the smell of mystery / Reverb leaking out of tavern doors and not knowing how the sounds are made / So I left home and faked my ID / I fucked every man that I wanted to be." Though these may be distant, long forgotten memories of Case's, when they're delivered, they feel like somebody pressing down on a bruise that you forgot was even there.

However, as flawless as Case's presence may be on Hell-On, the cohesiveness often slips with the guest vocal appearances, such as "Sleep All Summer", a moody duet with Archers of Loaf frontman Eric Bachmann. While Case's voice is memorable and comforting as it slips through the cracks in the walls, Bachmann's voice is so stale and hyper-masculine that it completely diminishes Case's typical grandeur.

Having said that, these moments are scarce and hard to find across Hell-On, and they are mostly forgotten with the handful of other vocal features, such as Kelly Hogan and Nora O'Connor, both featured on the closing track "Pitch Or Honey", a wild and keyboard-heavy track that often leads Case into a direction that sounds like some form of strange, ambient-folk, while both Hogan and O'Connor's backing vocals soar, and the tempo begins to climb upwards. Case is no stranger to this sort of control within a song.

As Neko Case gets older, her songwriting and overall musicianship have no intention of plateauing. Instead, they grow with her, and the end result is always something organic and strangely beautiful. Case's voice is a forceful presence that echoes in the back alleys of every dive bar, tavern, and club that every veteran band or up-and-comer plays at, becoming one with the "reverb leaking out of tavern doors." Neko Case is a musical wallflower, immersing herself with the echoes, becoming one. Let's just hope those echoes keep coming.