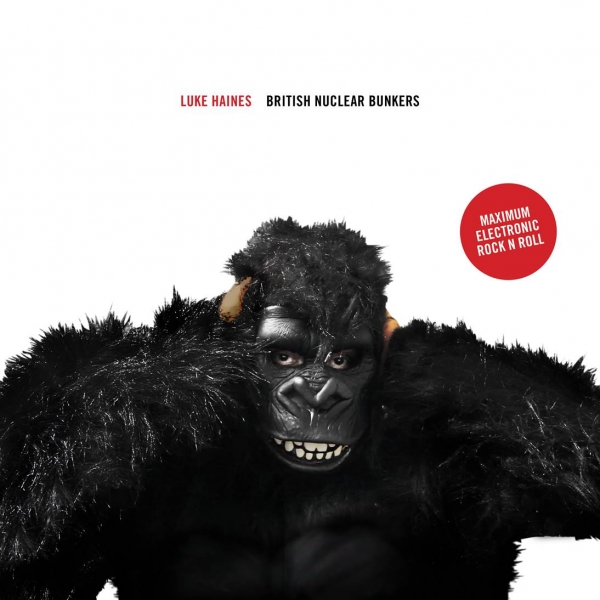 ​If you haven’t been following Luke Haines’s career of late, a brief recap: you’ve missed out on some of the most eccentric, compelling and (sometimes) gratuitously odd music being made in the UK today.

His trio of self-produced concept albums - 9 1/2 Psychedelic Meditations On British Wrestling Of The 1970s And Early 80s, Rock And Roll Animals, and New York In The 70s - may well be some of the strongest, strangest work of his long and storied career. Haines's seventh solo album isn't even the weirdest thing he's put out in 2015. That honour goes to his fifteen-minute "micro opera" Adventures in Dementia - a rare misstep - in which The Fall, unknowingly fronted by a Mark E Smith impersonator -  have a head-on caravan collision with the frontman of Nazi punks Skrewdriver. No, really.

By comparison, British Nuclear Bunkers is a normal affair, if not quite business as usual. It's an almost entirely instrumental album of what Haines calls "maximum electronic rock n roll". Its pastorally savage synthesised soundscapes which wouldn't be entirely out of place on one of Suicide's more poppier efforts or a compilation of early Mute Records material. Hell, if this was on Ghost Box - rather than the work of a former-Britpop-frontman-turned-arch-memoirist - the hauntology set would be buying this in droves.

The album's conceptual throughline is obvious throughout; it begins with "This Is the BBC", a recording of an emergency warning message, announcing that "information of a possible nuclear strike against this country has been received." From there, Haines's arsenal of analogue keyboards attempt to conjure images of a post-nuclear wasteland, with Haines (possibly dressed in a gorilla costume) finding his way to relative safety through the vast tunnels of underground bunkers still lying dormant below England's no-longer green and pleasant lands. There's no plot, obviously, but the mood as as eerie as the former Auteur has ever acheived.

Given how out of character the album is for Haines, it's tricky to single out any of these ten (mostly) instrumentals for particular damnation or praise though, as a titular doff of the hazmat suit to Captain Beefheart, the nearly-raving "Mama Check the Radar at the Dada Station" still makes me smirk. There are some other, more obvious, touchstones to be found here though: "Cold Field Morning Under Bliss" sounds like soundtrack to the tentatively hopeful morning after a John Carpenter frightfest, and "Pussywillow (Kids Song)" splits the difference between the Wicker Man score and Hot Butter's deathless "Popcorn".

British Nuclear Bunkers is a record that could only sound more desolate if you used it as a makeshift soundtrack to When the Wind Blows or Threads. Haines has never made an album quite like this, nor did anyone really expect him to; then again, his recent career has been proof that he can do whatever the hell he wants (micro operas aside) and pull it off with wilful aplomb. The album deserves a place alongside that other pantheon of great British post-nuclear pop, Young Marble Giants' "Final Day". Much like that classic single, it doesn't outstay its welcome, doing its unsettling job in less than half an hour. After that, the fall-out is yours to deal with.